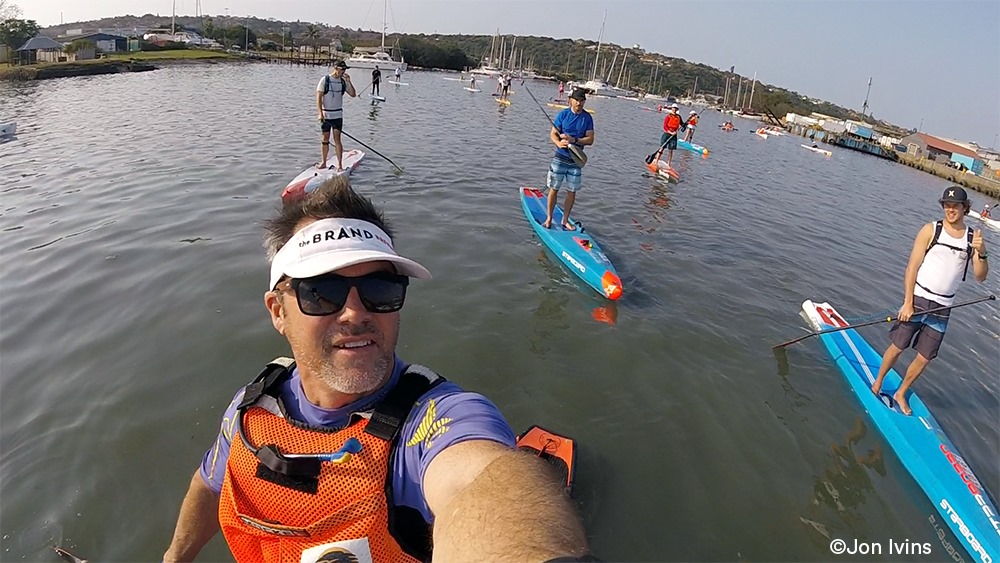 In the weeks’ build-up to the auspicious annual race through the Durban Harbour, paddlers had a keen eye on the weather and wind predictions. Initially, the reports were not looking too great and the thought of a long slog was certainly starting to become a reality. As race day arrived the weather was perfect and a window had appeared allowing paddlers to make a break and hopefully be unscathed by an ominous on shore wind set to arrive mid-morning.

The SUP field was 18 strong across the divisions including two prone borders for the very first time! Race favourites Dylan Frick and Charlotte Atherton were setting their sights on the top honours for the day. A stacked line up in the juniorette’s field had last years SA Junior Karisa Grace setting out to defend her title, with Durban’s Jess Rankin and Cape Towns’ Chiara Vorster both eager to get to the top of the podium.

The Legends Field had a new ‘young gun’ arrival Shayne Chipps’ relatively fresh from a few races on the European Circuit – definitely stirring some rivalry amongst the competitive Legend field.

At approximately 09:15 racers were under starting orders, lined up, set and ready to go. Paddlers were to head across the Durban Harbour and make their way out the channel entrance, banking left and heading to the final turn buoy before hitting the beach at Marine Surf Life Saving Club. Frick made his trademark dash at the start line, followed closely by Klos, Park-Ross and Swemmer whilst, not so far behind Atherton and Vorster were well on their way in the women’s field.

Paddlers negotiated their way through the port channels’ whilst on the look-out for dead spots and shallow sand banks waiting to swallow up boards. On approaching the main channel crossing, edging closer to the entrance the onshore wind started to loom with a gentle chop on the water and a steady headwind. In the women’s field Atherton had pulled away from Vorster with De Billot and Williamson in tow whilst Frick had widened the gap from second place, with Swemmer slightly edging off from Klos with Park-Ross in pursuit.

The timerkeepers’ clock was approaching the hour mark and the gentle breeze had now strengthened to a steady headwind and paddlers were making the final slog out the Harbour entrance. Wind swell was up and the chop was up with it! Frick hit the beach in first place with a comfortable lead. Swemmer was knocked of his board by a surfski paddler and Klos managed to get caught up in the aftermath. Second place went to Swemmer and Klos securing his third place after a good swim. Atherton had mustered a 3 minute lead on Vorster and maintained to the finsh line to secure the win with Vorster in second and De Billot taking 3rd. The juniorettes’ field was trumped by Grace, with Rankin in second and Vorster in 3rd. Well done to these girls for the amazing accomplishment. The Legends field was grabbed by Chipps with Ivins in second and Oets taking third. The prone divisions were won by the brother sister team – ‘Team Buncombe’. Special mention must be made to Murray James and Shelly Naylor, both new to the Long Distance SUP scene making an incredible display of perseverance and tenacity to get to the finish line after a real tough morning facing harsh winds and ship movements in the port.

A big thanks to Bay Union / King of the Bay organizers for allowing the Stand Up Paddle and Prone Borders to participate in this iconic race and SUP Durbs! Committee for assisting on the SUP admin side of things. 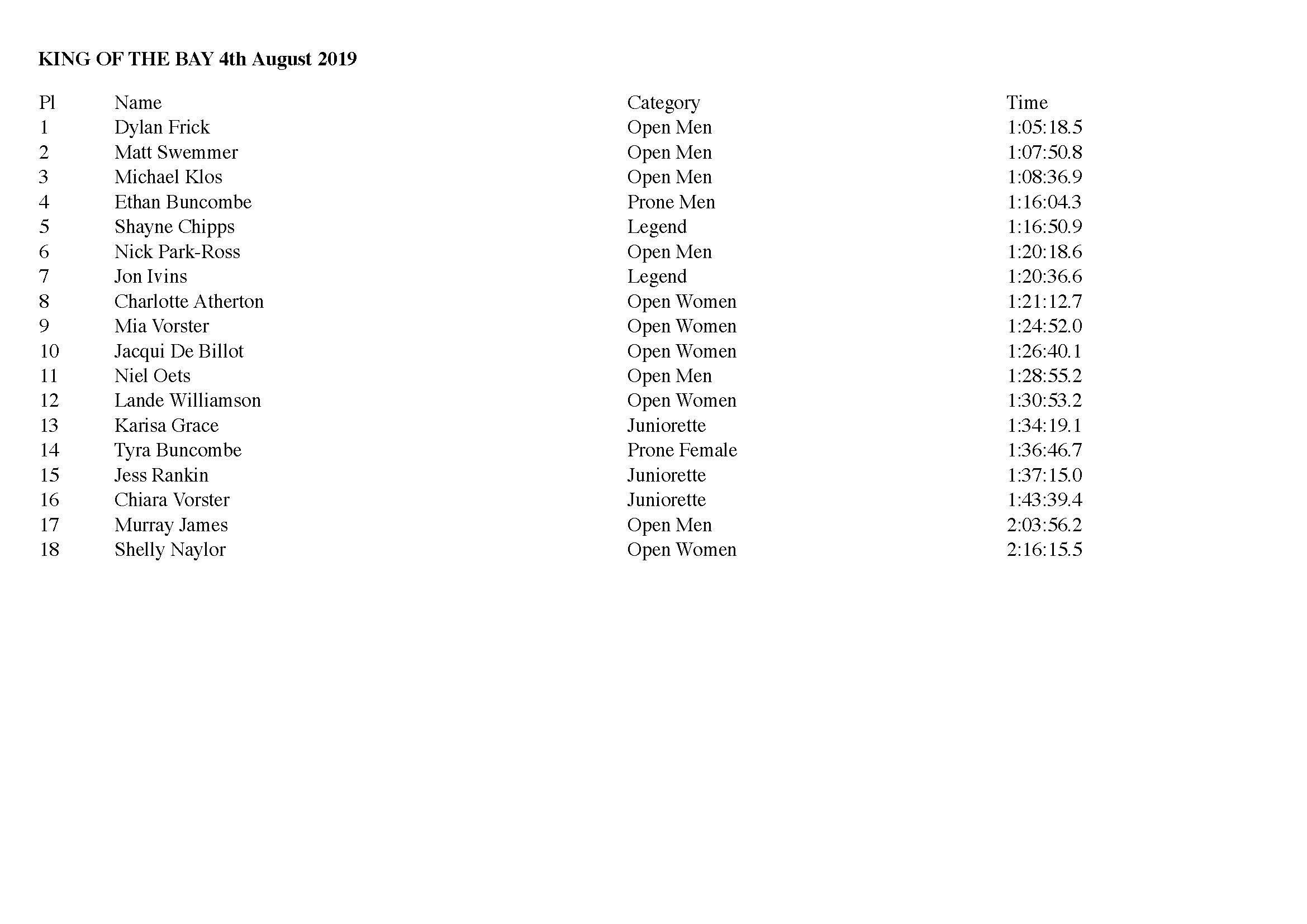 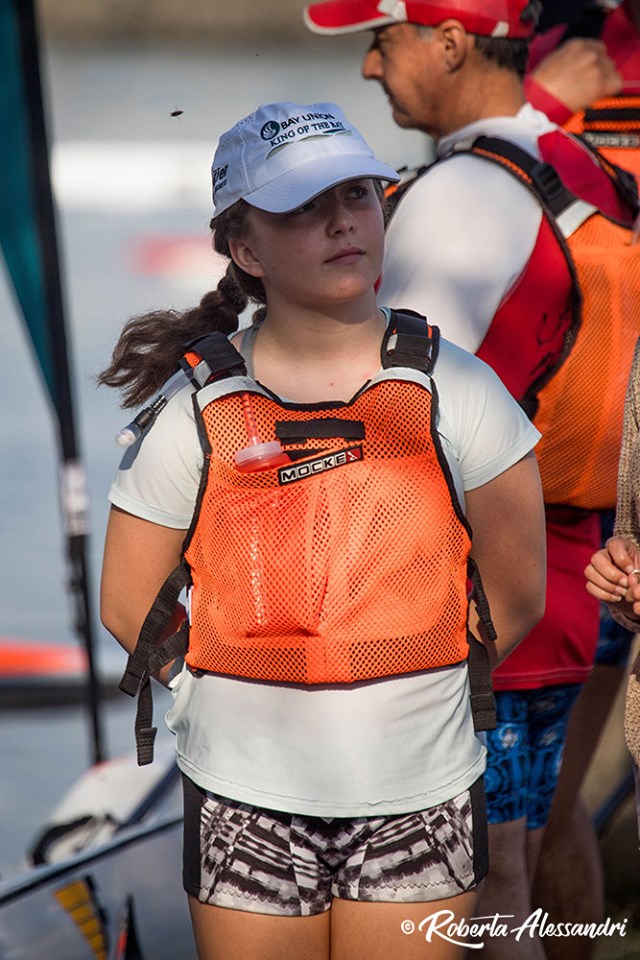 Make sure you check out more photos on Facebook, here. Next race coming up is Zinkwazi on 10 August. Make sure you do not miss out on this one!