Sunday, 24th April 2016 | Durban ~ the annual King of the Bay event was a twofold event, incorporating the SUPSA sanctioned Stand Up Paddling Race, making it a recolonised national race, with some big names coming up from Cape Town to compete like international SUP athlete’s Dylan Frick (Starboard), the TK’s Taryn & Tom King (Coreban) up from Cape Town. In the men’s race the resident Jo’burger Chris Couve (Starboard) went head to head with Dylan. This event is fast growing and the 2016 event was the  biggest ever SUP field of 40 SUP racers. 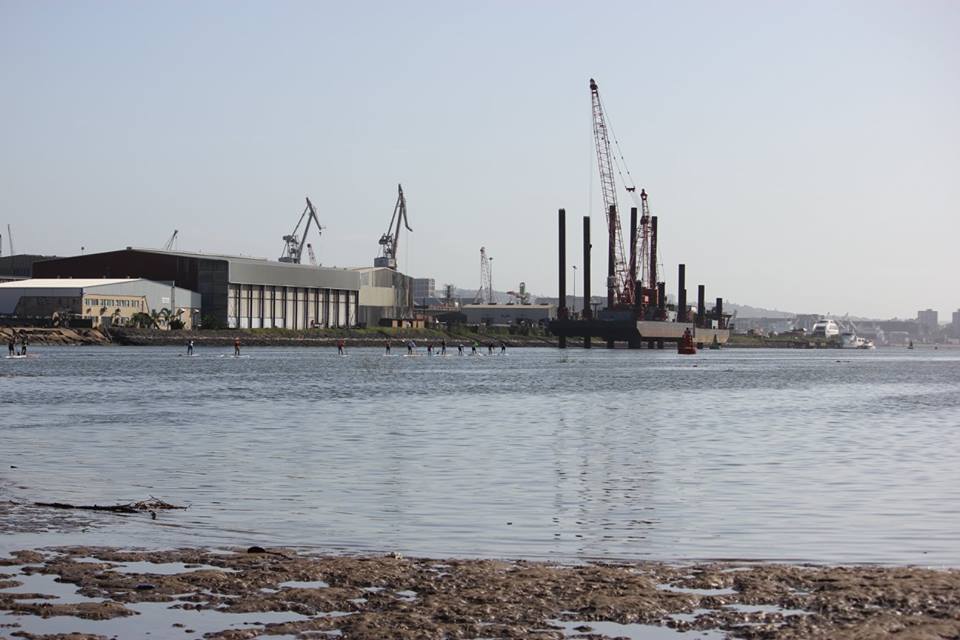 The iconic Durban Bay setting the backdrop for the 2016 King of the Bay SUP Race | Photo Credit: Anna-Marie Frick

The race started at the old Stella Canoe Club, well up the harbour channel. A gentle but steadily building Northerly onshore wind had begun to blow at he start of the SUP race which meant the race was directly into a headwind through the harbour bay, making very tough paddling for any SUP paddler. Fortunately, not all was lost as the tide was pushing out so there was a fast current pulling the paddlers out the channel until they hit the open ocean. The men’s race started fast with Dylan taking up the front of the wave train with Chris in 2nd spot and Durbanite Daryl Batho in 3rd, after that with the main field all fighting for a position. Not long after the start the wave train broke up leaving just Chris and Dyl working out it in front together, taking turns pulling with Daryl  in his own between them and the next train, being pulled by Gunter Berger and the remainder of the field on his wave. As the field neared the harbour mouth, the full force of the Northerly wind had picked up and conditions going out became very rough with a strong headwind of 12-15knots blowing with some choppy wind swell underfoot. Dylan exiting the harbour mouth in first place with Chris now off his wave, but still pushing hard very close behind. The tough conditions meant that the wave trains broke up and it was every man for himself. Paddlers then B-line for the the beach finish in front of Durban Surf Lifesaving Club, at Veggies Beach. The swell was small but the still steadily building onshore wind meant that the SUPs were left paddling through trying & choppy conditions fighting a side wind all the way to the beach. After rounding the final turn can anchored not far behind behind a small surf break, SUPs caught a final wave onto the beach and finished with a short run up the beach with board and paddle in hand. Dylan won the men’s elite 14ft class in 1:04 and Chris in 1:05 and Daryl finishing up podium spot 3mins behind Chris. The woman’s race has also grown at King of the Bay now with 10 Ladies on the water this year. The two favorites Tarryn King from Cape Town and Jackie de Billot from Durban started off with a bang with Tarryn taking the lead early on with Jackie on her wave. The pace was high and they started overtaking the men’s field before the first buoy (the woman’s race starts 1 min after the men). At the 7th Buoy Jackie made a move to overtake Tarryn hoping to get a lead but Tarryn didn’t let go of Jackie’s wave. The race for 3rd was equally tight with Lande Williamson and Charlotte Atherton working together through the Harbor making good ground on the leading pack. Lande and Charlotte’s race to the finish started half way up the Harbor mouth into the beastly Easterly. Jackie & Tarryn remained in that train till the harbor entered the ocean and that’s where Tarryn made her move pushing forward on the left of Jackie and powering forward. Jackie tried to get on Tarryn’s wave but got caught out when the boards bumped and she fell off. Jackie raced to get on the board and paddling again with a gap of 20m it was now all or nothing. Tarryn took the wide line the better line usually when the east is blowing but Jackie felt the Southerly Swell still pushing from the day before and opted to use the diagonals from the ground swell to make some ground which she did. At the buoy Jackie had made it to the front now the race was on both Ladies paddled in on their own steam as there weren’t many waves. As they hit the beach it was a sprint to the end Boards and paddles in Tow. With the Sound of a Tarryn running behind Jackie she ran as fast as her legs could carry her and dived for the finish line to clinch the win in a time of 1.18.31 by 16 seconds from Tarryn in at 1.18.47. Lande and Charlotte paddled hard to the end with Lande Williamson sealing in 3rd place 1.25.26. 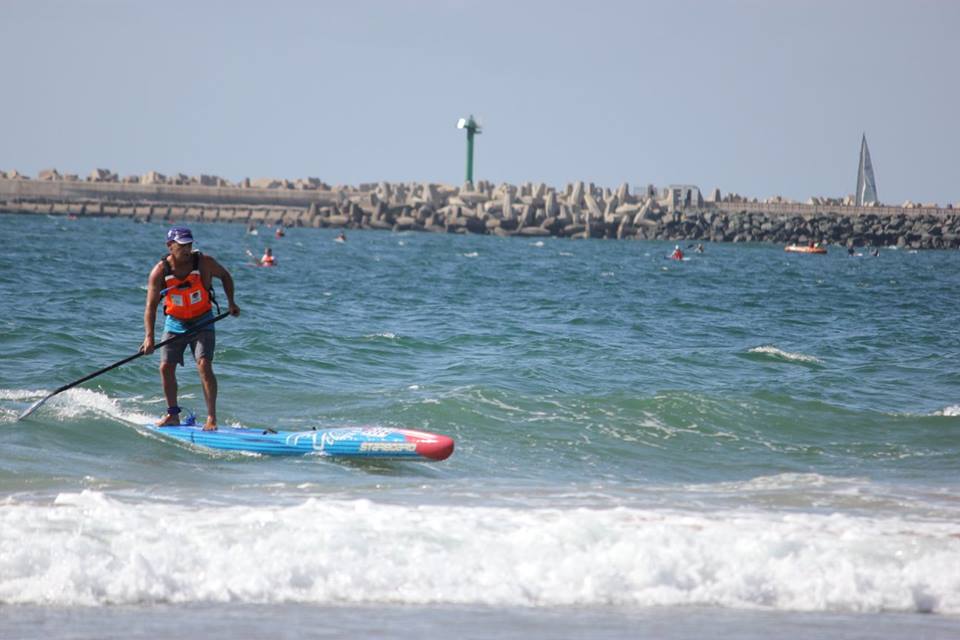 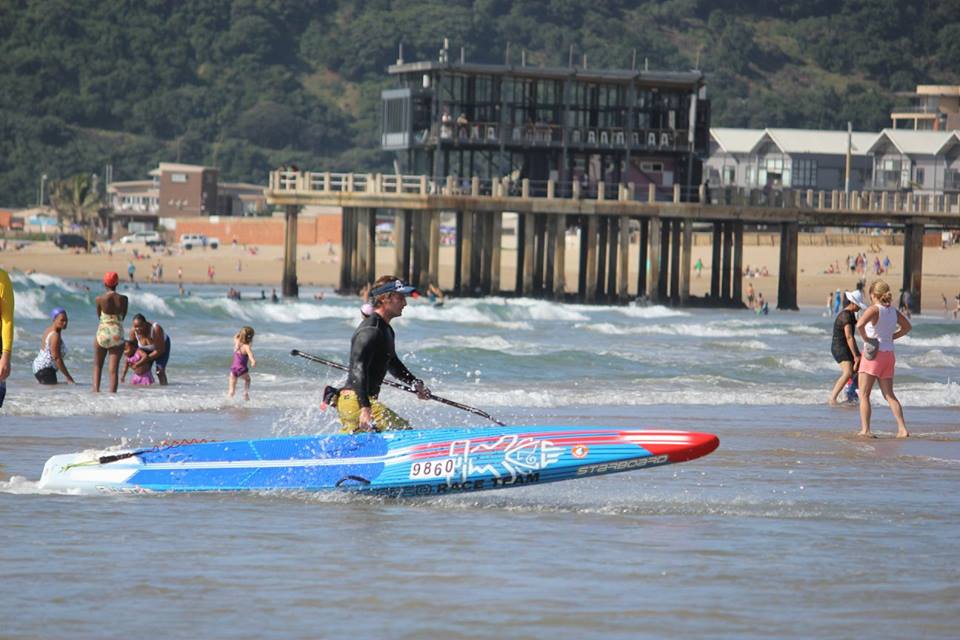 “I thoroughly enjoyed the race and am stoked with such a great turnout! It started off flat but as the onshore wind built, the conditions got really rough for a SUP and it was great test of my all round abilities.” ~ Chris Couve | Photo Credit: Anna-Marie Frick 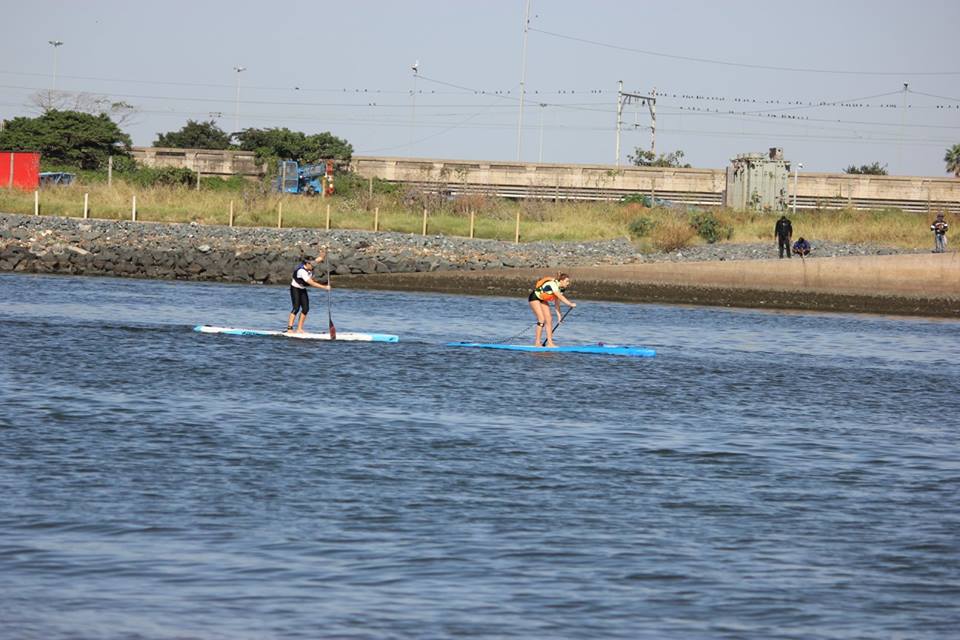 “It was a race of cat and mouse, we both had a game plan but it came down to the final sprint from the Harbor I felt good and I feel that my training is starting to come together.” ~ Jackie de Billot | Photo Credit: Anna-Marie Frick 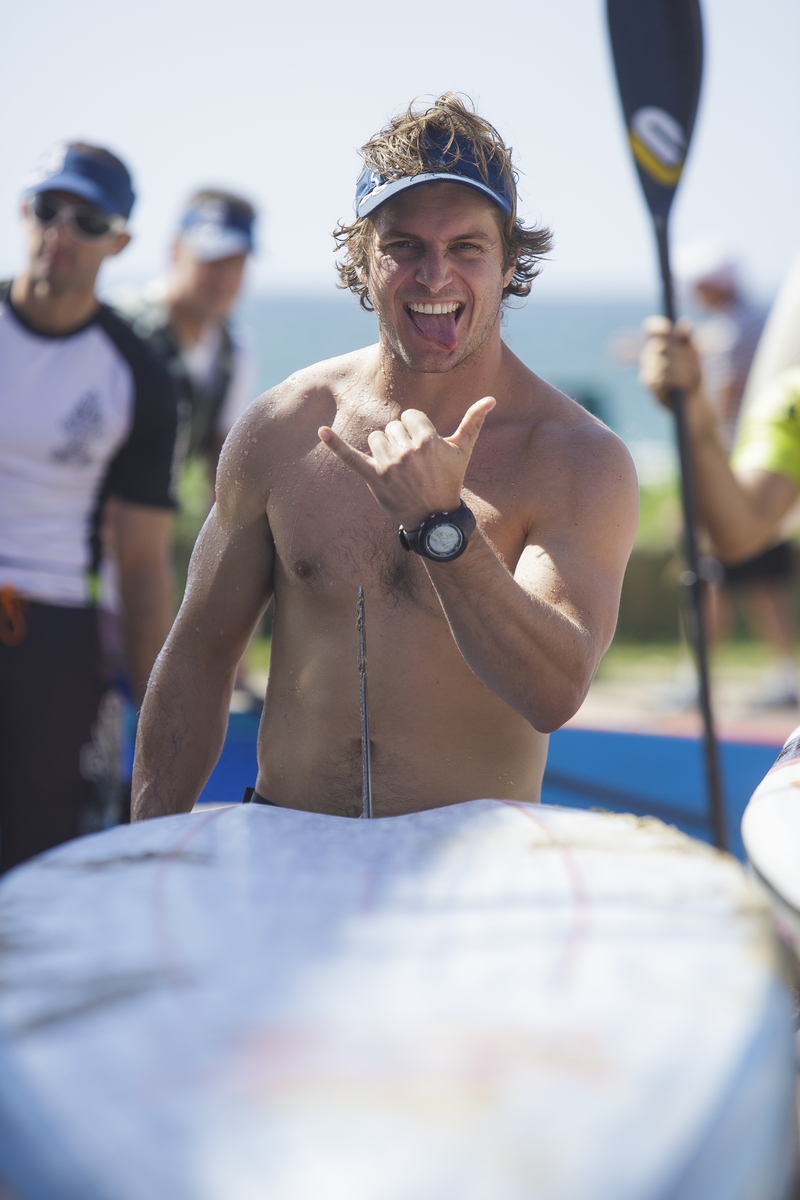 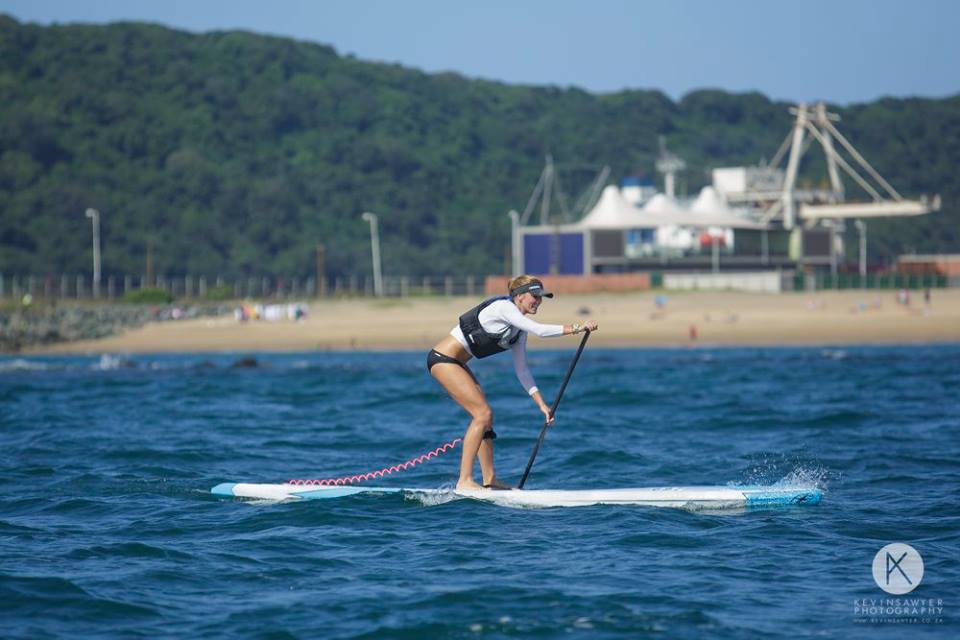 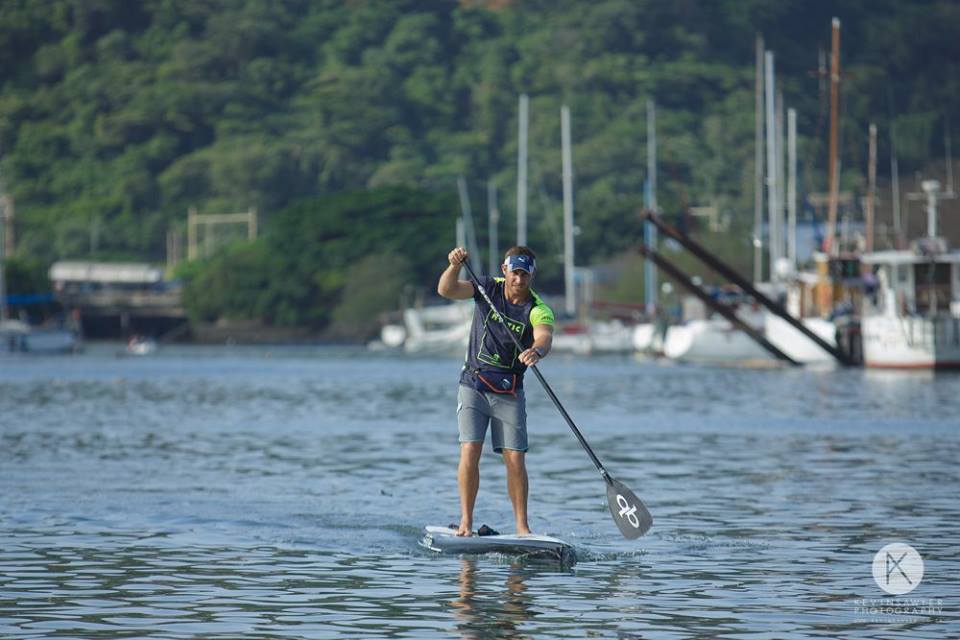 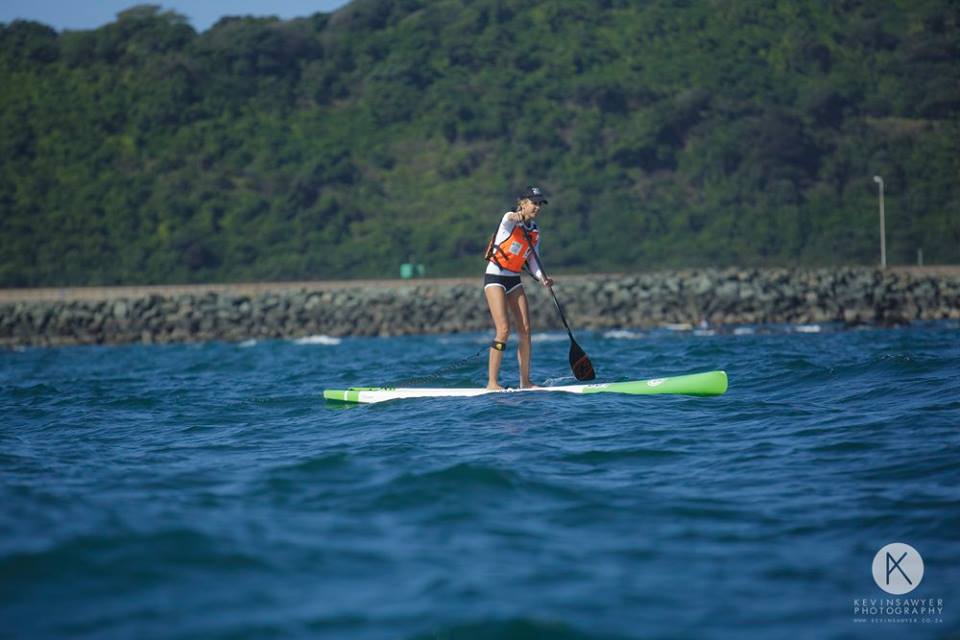 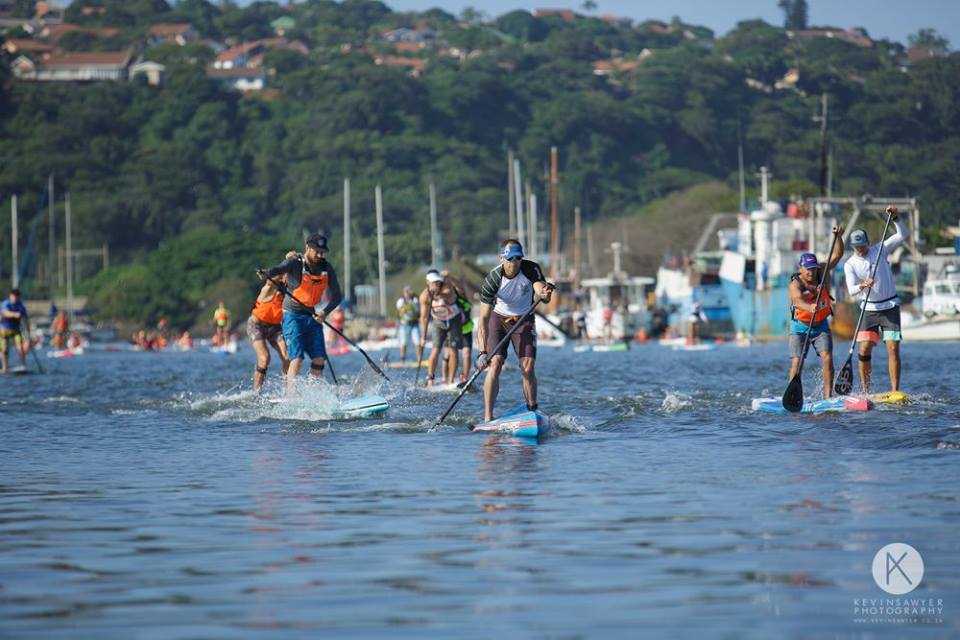 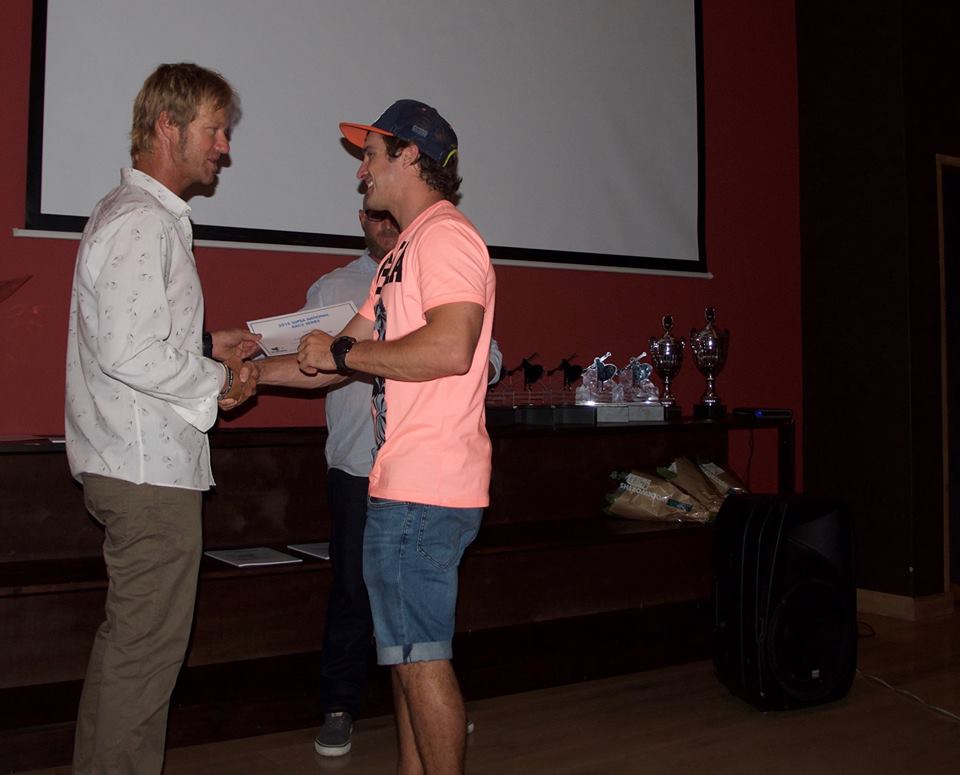 The SUPSA awards was an evening of fun and friendship as we recognise the achievements of our athletes during the  2015 SUPSA Surfing and Racing Series at the SUPSA Annual Prize Giving Evening. The evening was presented by guest speaker Greg Bertish, who also presented a very interesting slide show of the history of SUP’ing in South Africa.

The awards presented were as follows:

All past winner since the 1st SA Champs that was held back in 2011 in Cape Town have been added.

2015 Presidents Award for Service to the Sport

1. Lollo Wollheim – for her work as Secretary of Supsa and her timekeeping at the downwinder events. 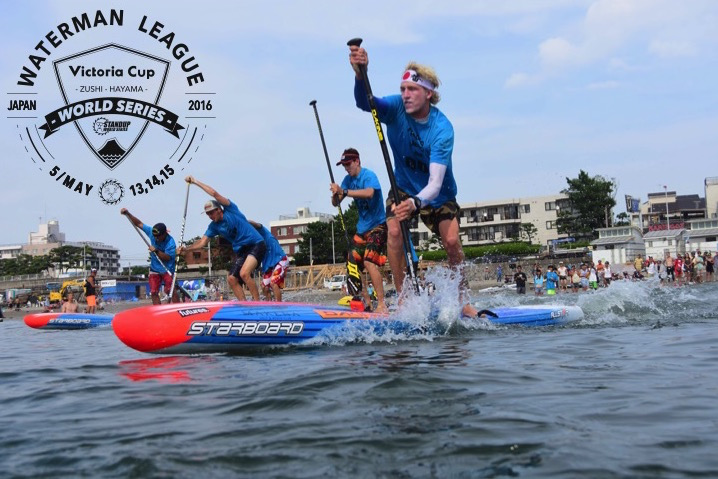 In just over a month’s time, the Waterman League and World’s best Stand Up Paddle racers will return to the beautiful Kanagawa Prefecture of Japan for the Opening event of the 2016 World Series, the Victoria Cup to be held at Zushi Beach, by Hayama Harbor.

Now in our 3rd year in Japan and as we witness exponential growth for the sport in the country, we are excited to return to Zushi Beach for what will be a groundbreaking event in 2016 and set the tone for a breakout season for the World Series as a whole.

Taking place from the 13th – 15th May, the Victoria Cup will host Pro division Long distance and Sprint Racing as part of the World Series circuit, but also Pro-Am and Amateur racing, with 6km, 3km and 1km courses, not to mention youth racing and the now famous, Na Kama Kai Clinic.

Entries are now open for all divisions, with all international entries to go to: http://watermanleague.com/events/2016-victoriacup-japan and click on the entry link embedded on the event home page while local entries should enter through the Japanese SUP Industry Association.

One thing is for sure, it will be a weekend to remember and a dramatic Opening event to the 2016 season. Stay tuned to www.watermanleague.com as we build up to the 2016 Victoria Cup Japan. 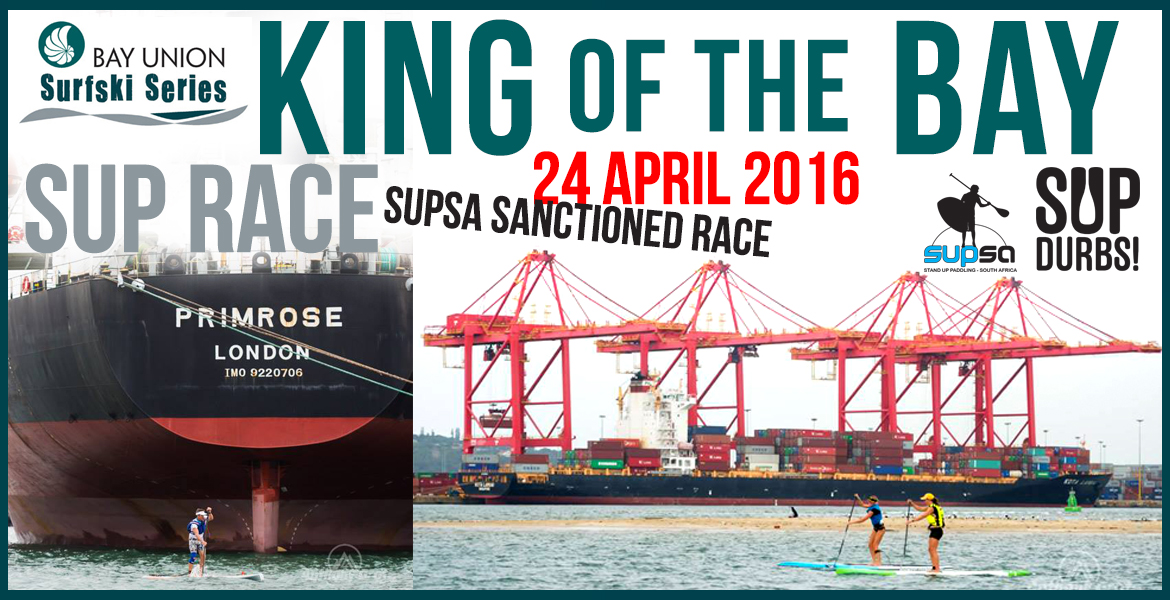 It’s time to get ready ready for the next instalment of the 2016 SUPSA Race series.

The King of the Bay SUP Race, as part of the Bay Union Surfski Series, is around the corner and it’s time to get ready for some bumper SUP action through the Durban harbour.

You can enter on the day at the start, so get there early or pre-enter at DUC on Thursday, 21 April, after the dice.

This is a SUPSA sanctioned race, so R50 extra on top of your entry will go to SUPSA. This race will count towards your SUPSA ranking.

Further details will be posted on www.pitchandpaddle.co.za  and www.supdurbs.com as they become available.