We are unfortunately needing to postpone The Combustion Technology Hout Bay Series race 3, this Sunday, due to the weather conditions. We have been monitoring the weather closely and have taken guidance from our safety crew. The 3rd Race of the series has been moved to Sunday 6th October. Our apologies but safety comes first. Click here for the new date’s race registration. 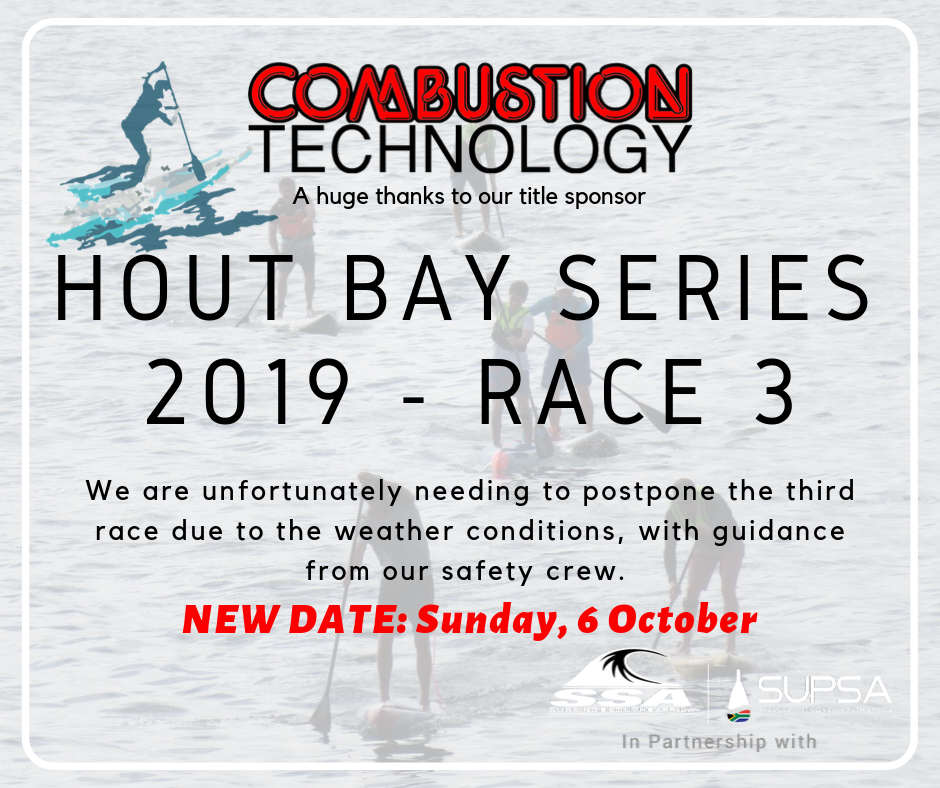 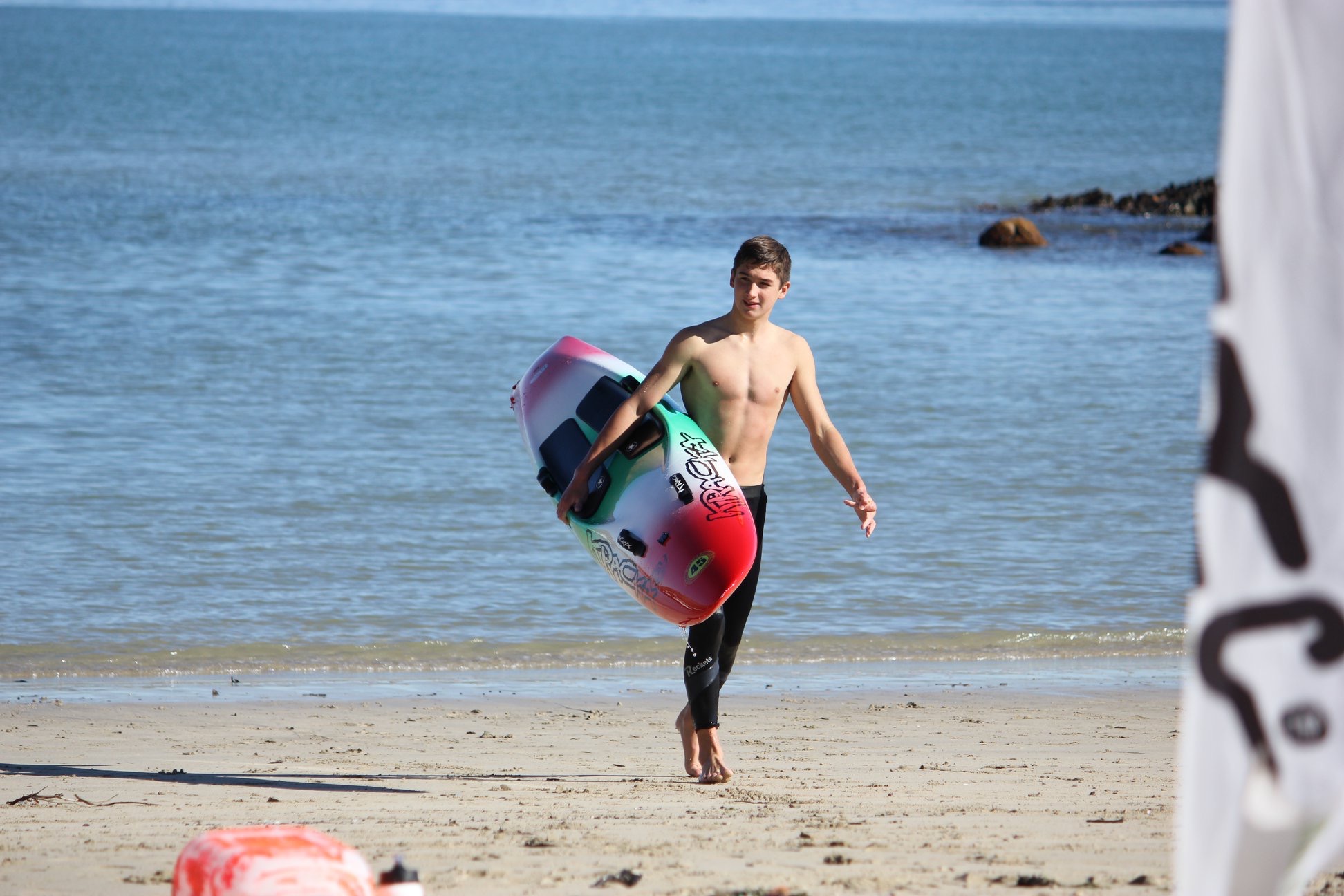 Not a breath, hardly a wave and a sparkling blue sky greeted the assembly of paddlers for the third race of the G-Bay Winter Series. A collective invite to the greater Peninsula paddling community brought numerous new faces of SUP and Proners along with a few surf-skier joking they needed to renew their passport for the outing to the other corner of False Bay.

In ideal conditions for PBs the race for the 8.35km short course from the Main Beach corner along the cliffs to the 5 Houses Rock returning back towards Harbour Island for a clockwise lap and back to the start saw Harry Lake in 53m43 take the honours over Scott Hogg with Jurie Wessels over 65 Bullet a few minutes behind whilst Lizl Hobson lone ski lady improving her PB in 01h04m03.

The SUP saw Rory Smith steak home in 56m27 whilst recently recrowned SA SUP Wave Champ Dylan Frick on a 12’6” board appeared to be teasing his father Francois as they hit the beach together but some 17 seconds separated them as Frick senior caught his breath to make the finish line in 59m14. Joshua Coetzee of Team Natural Energy and Guy Bubb of SUP Cape Town rounded out the male SUPs with 12 yo Chiara Voster showing her mettle as the lone female in 01h06m25 whilst in the Proners saw junior brother Ethan home in 01h12m17 ahead of Tyra Buncombe in an impressive 01h18m22.

The two-lap long course was a ding dong affair between Ian Trautman a Fishoek powerhouse and Ernest van Riet fresh from a top 5 team in the Berg River Marathon finish that saw Ernest sneak the advantage in 01h20m46 averaging 12.5kmh whilst Anton Holtzhausen held off a speeding Bianca Beavitt the first lady and 2nd overall in the individuals at the Berg River Marathon whilst Rodin Tindall of Freedom Paddle teamed up with Dimmie de Milander took the doubles and provided an entertaining video for the days scenic route.

Again the ever-improving Kira Bester took the junior ladies with Helen Rossouw rounding out the ladies podium, with Gary Pepler again taking the advantage over Charles Murless the long Bullets.

Kit Beaton the first Proner to complete the 50km Cape Point Challenge and 28km Freedom Paddle around Robben Island with Jadon Wessels had a gentlemen’s agreement to only race the last 1.5km that saw the young gun 18yo pip Kit a seasoned Bullet by a meagre 4 seconds after 16.7km averaging 7.80 km/h.

With a fantastic turnout that has seen the attendance numbers double since Race No 1 with a special appearance from Rob Moody and Tim Fey Venn both finishing their first PE2EL in December along with stalwarts Gareth Pinky, Patrick Elay and Paddle Magazine editor duo of Tracy and Terrence Ward showing the appeal of participation beyond the Helderberg community.

Race 4
A gray mist had engulfed the entire Cape Peninsula, yet a determined sun had burnt away with a warming Berg draft opened up a blue sky window with a glassy flat sea that hardly had a drop of water out of place.

A heavily bearded hardman and a top 10 PE2EL finisher Crispin Thompson had arrived with Bianca Beavitt being the SA Surf-ski Ladies 2nd seed and was in the business end of her World Champs training campaign and they set off in blistering pace with Jamii Hamlin making up the trio to round the Five House Rock at 3km, then steamed down to the Harbour Island for a clockwise lap before the race convenor dropped off and felt it would be way more sensible to paddle with Jeremy Thompson Go Deep sponsor for the remainder of the race as they quietly conceded that the Milnerton visitors were fitter, faster and very focused in their preparation for ICF Surfski World Champs in France come mid September.

Completing the short course Scott Hogg and Lizl Hobson were the lone surf-skiers finishing 55min31 and 1h02m37 respectively, yet for Lizl the result mean so much more to her as a year ago simply venturing a 100m from the shore was an achievement for her.

As many others away for SUP SA Champs in Durban which Natural Energy owner Dylan Frick clinched the Men’s title as young Chiara dominated the Junior Ladies, leaving Rory Smith 1h02m45 to pip his Cape Town SUP partner Guy Bubb 1h04m45 in the SUPrs whilst in the Prones Kit Beaton tailing Rory in 1h02m47 opened a sizable gap on u23 Jaden Wessels contesting on a lifesaving Malibu that seriously handicapped him as they completed the 8.35km in excellent times despite the spring low tide that effected the finishing 1km making it harder as the shallow water makes a sluggish pull on a crafts draft.

In the long course as expected Crispin kept Bianca close enough to test and stretch her over the 16,5km, but put the hammer down to finish in 1h23m56? as ‘Bubbles’ tapped in 2nd and the first lady in 1h24m11 whilst Jamii held off a strong challenge from Jeremy only seconds ahead in 1h26m58. Not far behind Rob Moody, Graham Roberts was holding off the mixed double of Terrence Ward with Tabera Joosten with Patrick Ealy, Charles Murless and Gary Pepler making up the Bullet trio along with ‘Prof’ Johan van Rooyen and new-comer from Sea Point Gary Morton claiming the Specski category. 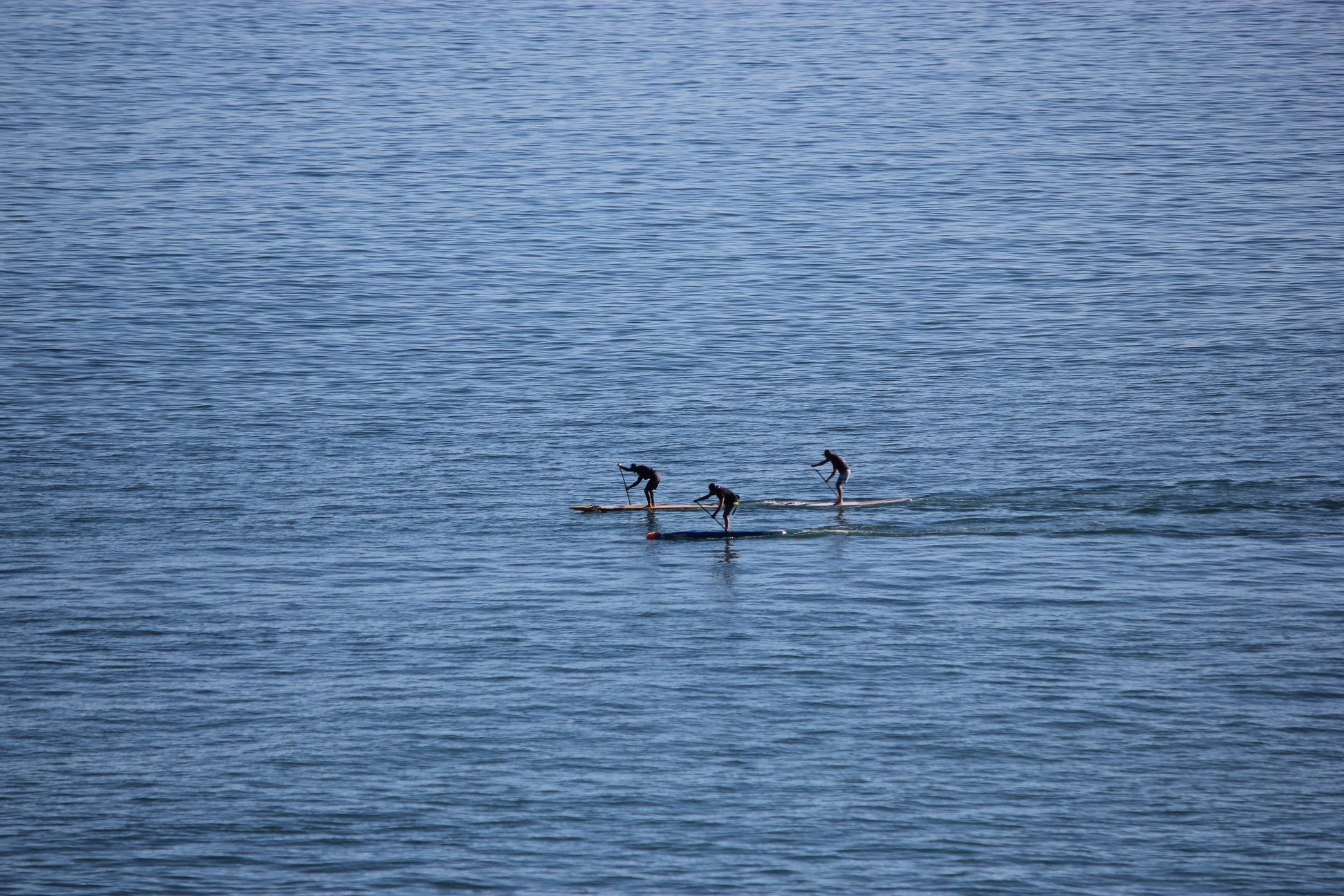 Race 5
1st of Spring dawned a grey overhead sky with a light onshore murmur causing a sloppy sea that wobbled with morning sickness as a seasoned field of surf skiers waded out to find deep enough water for a start in a super spring low tide that left several starfishes stranded on an exposed shoreline.

Blasting off Mike Schwan with long-time doubles partner Richard Allen set a furious pace whilst Bianca Beavitt hung on to their slip in her final preparation race for her ICF World Surfski appearance in France later this month leaving the rest of the field trying to catch their breath and find rhythm in an unsettle sea as they tussled for the remaining podium spots.

Robin Tindall of Freedom Paddle back from an injury layoff fell out his ski to clear the seaweed whilst Jeremy Thompson of Go Deep then led the chasing pack to the Five Houses turning rock that was awash with a surging sea. Heading back Jamii Hamlin caught the wave of the day from the Harbour Island buoys into the entrance as Mike and Richard already some 800m ahead were now heading out with Bianca not far behind them looking silky smooth as the remainder of the field flushed into the calmer water for a clockwise loop before heading back to the main beach corner for a second lap of the 8.35km course.

Michael van der Heerik and Johan van Rooyen had found the sea a little too choppy and decided to finish a single lap for a short course 1 & 2 respectively.

In the long course the lead double finished in 1h22m56, as Bianca claiming first lady and single overall showed how polished her preparation by smashing a 1h28m39 averaging 11.2kmh, whilst Robin recovered for his early swim found another gear to clawed back the gap to eventually pip Jamii into 3rd by seven second in 1h31m14 as they traded bumps to keep ahead of the main pack of Graham Roberts, Rob Moody, Stephan du Toit, Jeremy Thompson, Bennie Steyn and August Lohann in an increasingly testing sea that had everyone taking air strokes working their core strength and realising this was proper surf-ski paddling showing up any weakness in their skills.

With the SUPs and Prones excused for an Iron Man/Lady relay competition in Fishoek along with Kira Bester doing a coin flip as a SA Junior Lifesaving Champ and 2nd SA Ski Junior seed she, unfortunately, missed out contesting with SA ICF World Champs teammate Melanie van Niekerk who showed just how deep the level of ladies paddling is and finished strongly in 1h37m34looking slightly taxed from the 16.5km course but pointing to her padded up seat to commented it wasn’t the easiest of conditions for trying a tippy set up.

Patrick Ealy 1st Bullet 1h46m04 had managed to hang on to the lone mixed-double pairing of Terrence Ward and Tabera Joosten 1h45m52 for a portion of the second lap to hold off Gary Pepler as second Bullet just 45s behind.

What a great Series! Thank you Gordons Bay.

Xpression On The Beach November events 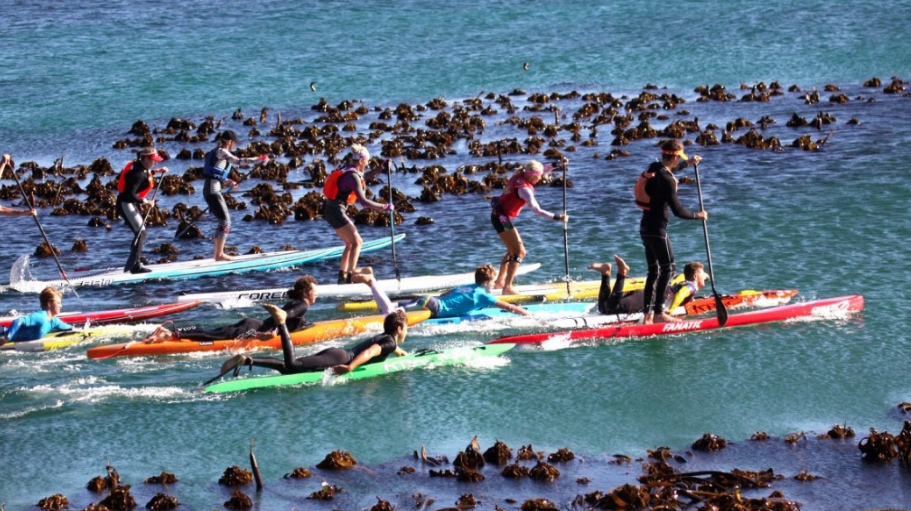 1. THE FISH HOEK MILE:
This will be a first for paddlers, following the legendary ‘swimmers’ Fish Hoek Mile which was hosted by FHSLC for decades.
The race is a sprint across the bay – Paddlers & swimmers will go off in waves from Clovelly to the catwalk, around a buoy and finish at the FHBSC. Athletes will start in 15 minute interval waves from 09h00 with the swim as the final wave.
** If there is too much wind, there will be an In’s and Out’s race around an M-shaped course in front of the club.

2. THE MILLERS RUN:
This is the iconic 11km Downwind Run from Millers Point to FHBSC. (To take place around 1pm)
**If there is no wind, there will still be an 11km paddle.

Thank you to our sponsors:

10 November
Sunday 10th Wave Riding is the final SUPSA Sanctioned event of 2019. This is a one day event, so competitors are only able to enter ONE division, which should be their primary division. Surfers Corner is the location for the day.