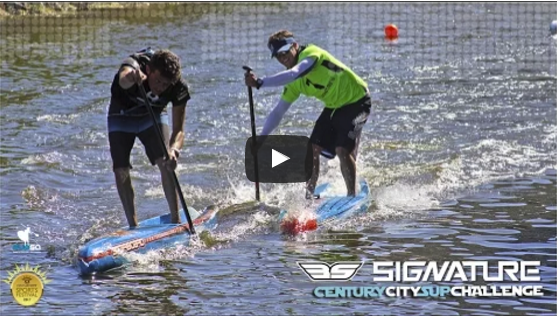 This was the first of nine national races for the year, and a great opportunity for racers to put their points on the board towards the Stand Up Paddling South Africa (SUPSA) race rankings.

With the conditions looking stellar leading up to race day and most of the country’s best in town and up for the challenge, the event was set to be one of the best yet.

Sunday morning kicked off with pre-registration, which was held at the Century City clubhouse. As the competitors began to roll in from all over, there was a sense of anticipation & hype around the event, which was nothing short of tangible.

After collecting contest T-shirts and race vests, the competitors and crowd made their way toward the race arena where the contest briefing and race start would take place.

Mike Oxley, contest director, welcomed the competitors, and after briefing them as to the course layout for both the Elite 10km & social 1.5km, handed over to the race official, Steven Tripney, for a run down on the rules & race technicalities.

With the Elite 10km due to start at 9am sharp the competitors took to the water in preparation as a few of them began to run through their warm up routines before lining up and awaiting the countdown for the start of the men’s 10km national race.

3,2,1…and the men’s race was off to an explosive start with over 40 of the country’s top paddlers hurtling down a 400m straight before taking their foot off the gas as they entered the first Buoy turn. SA’s no1 (Dylan Frick), last year’s winner Chris Couve, and an in-form Kimon dos Santos all made their presence known as they rounded the buoy first and sprinted their way to an early lead ahead of the pack.
Following closely behind them was Thomas King, Nick Park Ross, Cameron Green, and Shayne Chipps as well as the first of the Juniors division: Matthew Maxwell & Nathan van Vuuren.

Exactly a minute after the first start, the siren sounded and the ladies were off. Jackie de Billot, Lande Williamson, Monika Wohglemuth, and Alex Tripney found their stride quickly, solidifying their lead early on into the race and slowly closing the gap between them and the men

Within the first lap the competitors, both men and women, began to find their rhythm and position themselves for the long haul.

An hour into the race, the tension began to grow as the paddlers were now on their final lap and heading towards the finish line. The crowd was on their feet in anticipation, knowing that at any moment the race for the finish line would be on.

Managing to maintain a comfortable lead throughout the race, we saw Dylan, Chris, and Kimon round the last of the bends towards the finish line.

The sprint for the finish was on as Dylan and Chris went head to head, emptying their tanks of anything they had left.

Edging across the finish line first was Dylan with Chris only half a board length behind with Kimon coming in a few seconds later to secure a 3rd in what was truly a nail biting finish.

The Juniors were next as Matthew Maxwell and Nathan van Vuuren had the crowd in an uproar with yet another close sprint finish. Matthew managed to cling on to the lead this time with Nathan finishing hot on his heels followed by Cameron Tripney in 3rd.

The 1.5km Social race was up next as over 40 paddlers of all ages and skill levels took to the water on a board of their choice with the sole aim to JUST HAVE FUN.

First to finish within their categories were…
Mike Fiet – raceboard, Hannes van den Heever – Inflatable, and Matthew Fiet – waveboard. Taryn King / Tammy Foster were first to cross the line for the ladies and Courtney Green being the first of the Juniors.

4 x teams were chosen, each with a total of 4 competitors in each team. The team members would be on a 22ft inflatable board at the same time, racing for the fastest lap time.   Team 3 – Cameron Green, Nicky Venter, Christine Frazer, and Adrian Van Varik managed to claim first place position with a time of (2:14)

With the contest drawing to a close the competitors, along with the multitude of supporters, made way to the clubhouse where the prize giving was to take place.

A massive amount of support was shown as the country’s top paddlers were handed their rewards for all the hard work and training that they had put in leading up to the event.

Without a doubt the Signature Century City SUP Challenge will be etched in everyone’s memories as an epic start to the 2017 SUPSA race season.

Click to enlarge pics from the event. Big shout out to Maz Tissink for capturing the awesome shots! 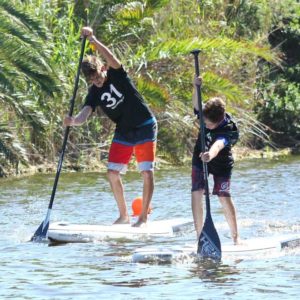 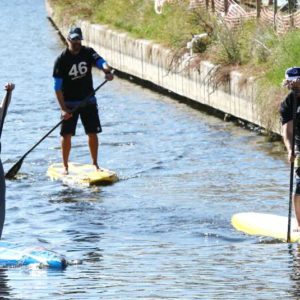 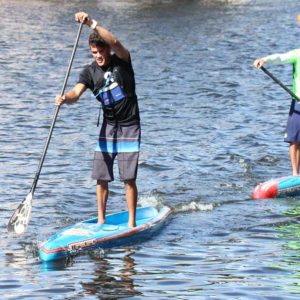 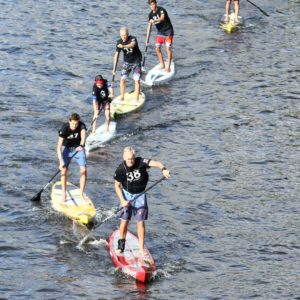 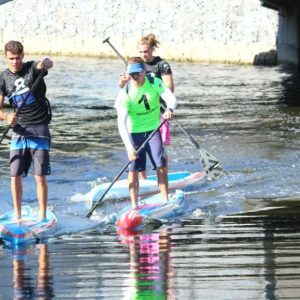 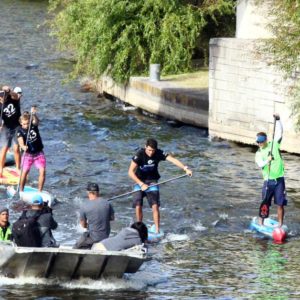 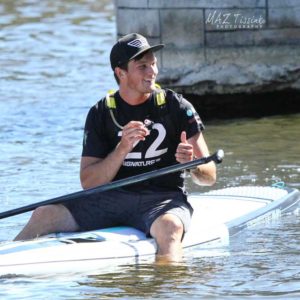 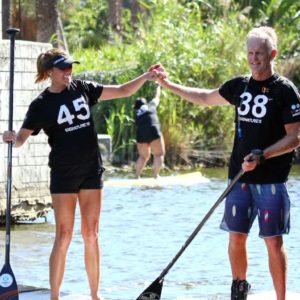 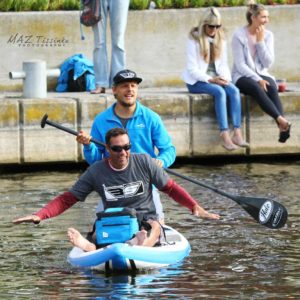 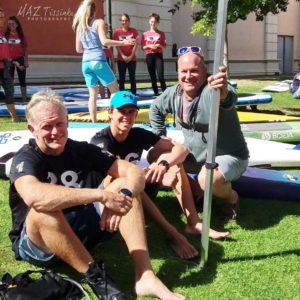 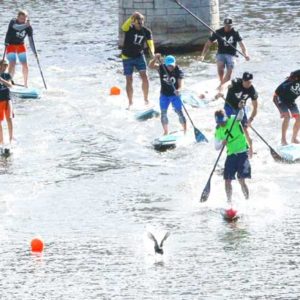 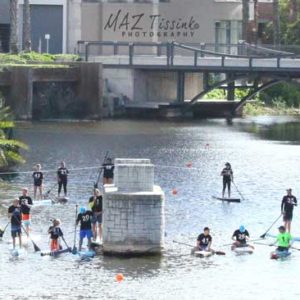 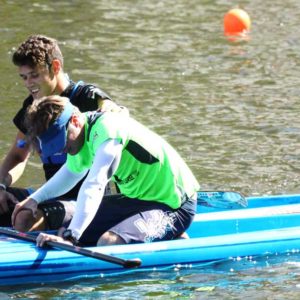 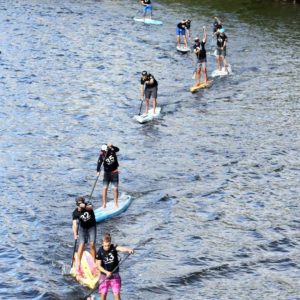 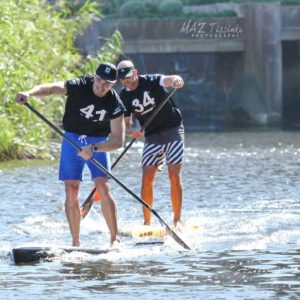 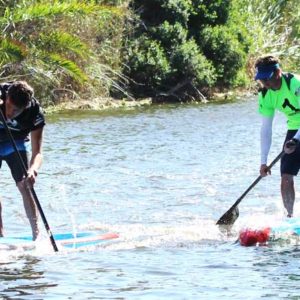 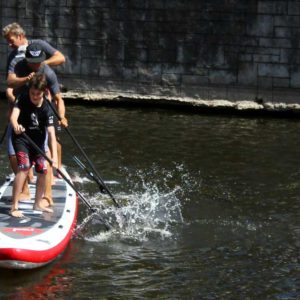 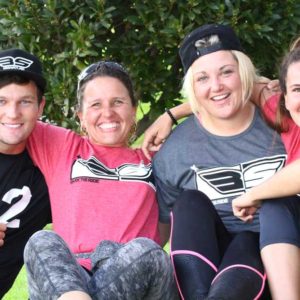 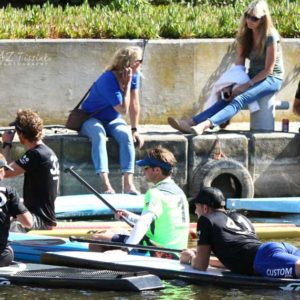 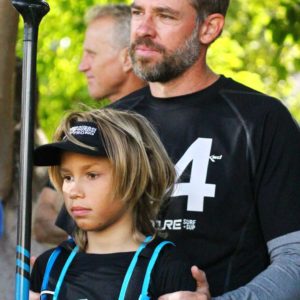 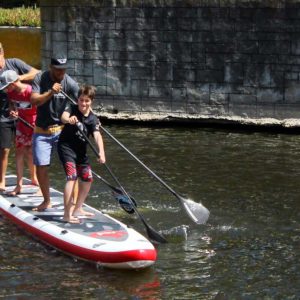 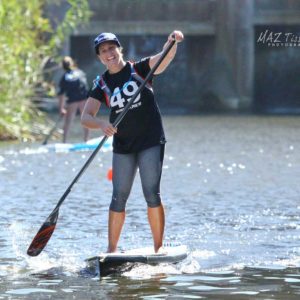 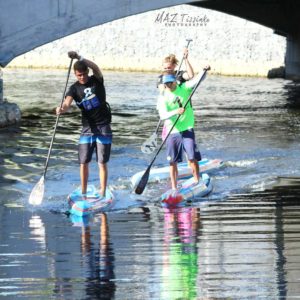 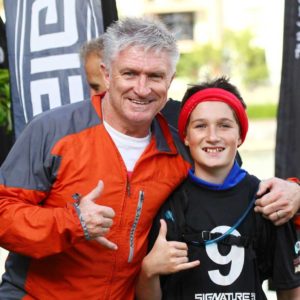 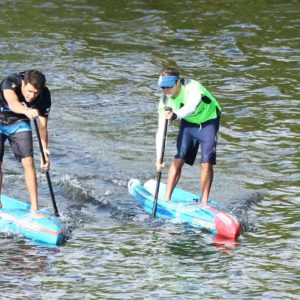 Here are the results for top 3 in each category:

The course measured 9.75km – this was 14″ board length class with the exception of the juniors racing 12’6″.

There was also a Fun 1.5km Race that took place after the main event ~ these boards were 12’6″ and under: