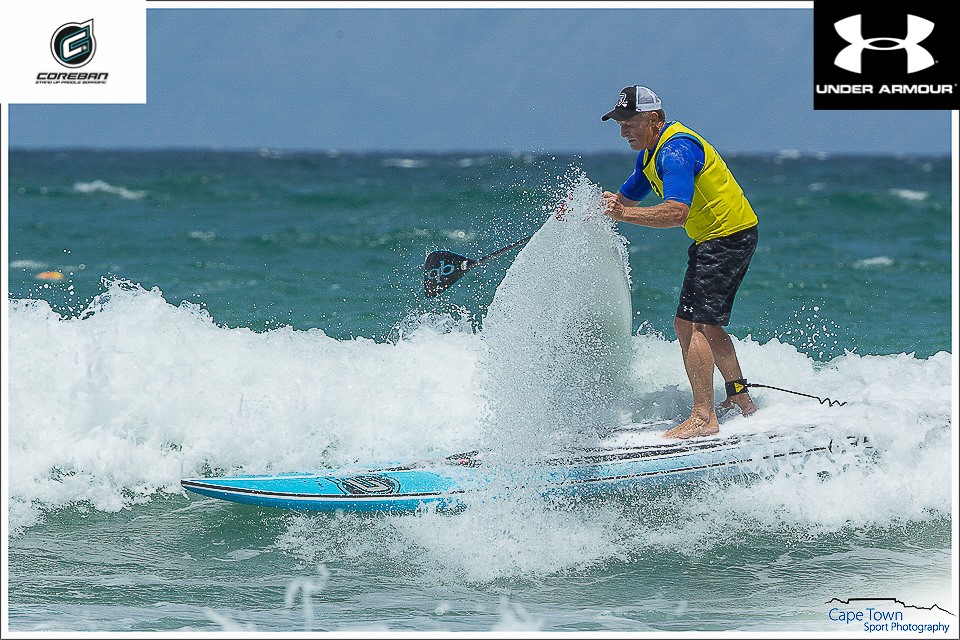 The longest running event on the annual SUPSA event calender, the Coreban Summer Series, took place amidst much anticipation last weekend. 2015 saw a few changes from the past few versions of the event;
In addition to Coreban Stand Up Paddleboards, who have sponsored the event since its inception in 2010, new co-sponsors, Under Armour as well as Xpression Sports Coffee added financial and organisational backing to this popular event. The three day event also moved from its traditional venue of Bloubergstrand to take place in False Bay for the first time. 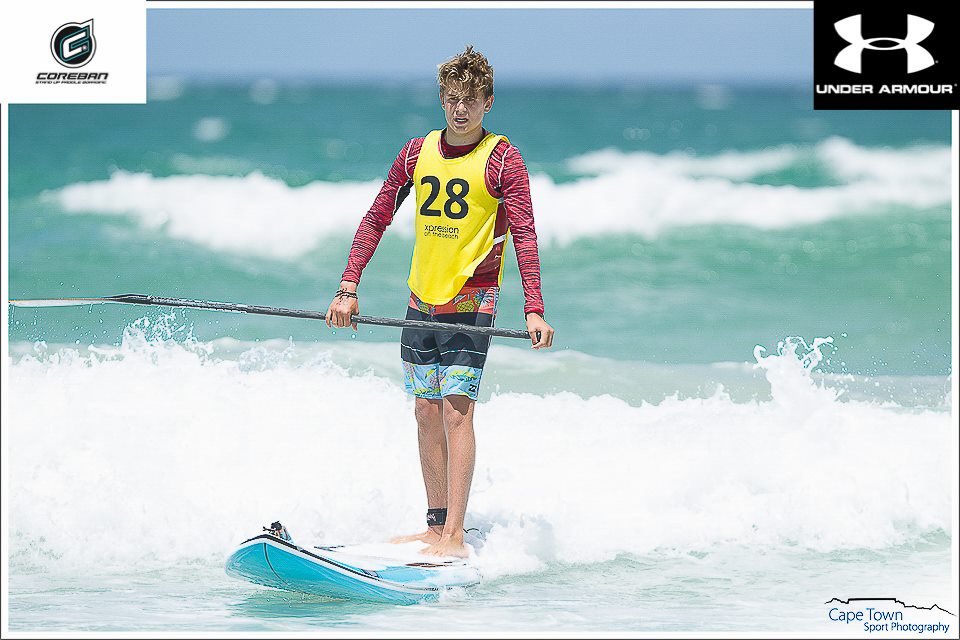 Matt Maxwell making it look all too easy. Matt placed 3rd in the Juniors Overall

This event is the first sanctioned race and surf event of the 2016 SUPSA rankings series, which encouraged a growing contingent of Durban paddlers to make the trek down to Cape Town to compete. They were welcomed by the Capies and some warmer conditions than their last trip down for the 2015 SA Champs in held in an August South Easter!
Prevailing conditions determined that the event was actually completed in two days, with the entire Surf contest running during a marathon 10.5 hour day on Saturday at Muizenberg. The first heat of the Mens Open division entered the water in clean 1-2ft offshore waves at 7.30 am and 41 heats later the Mens Open Final was completed in building 3-4 ft onshore surf which tested the competitor’s versatility in varying conditions. 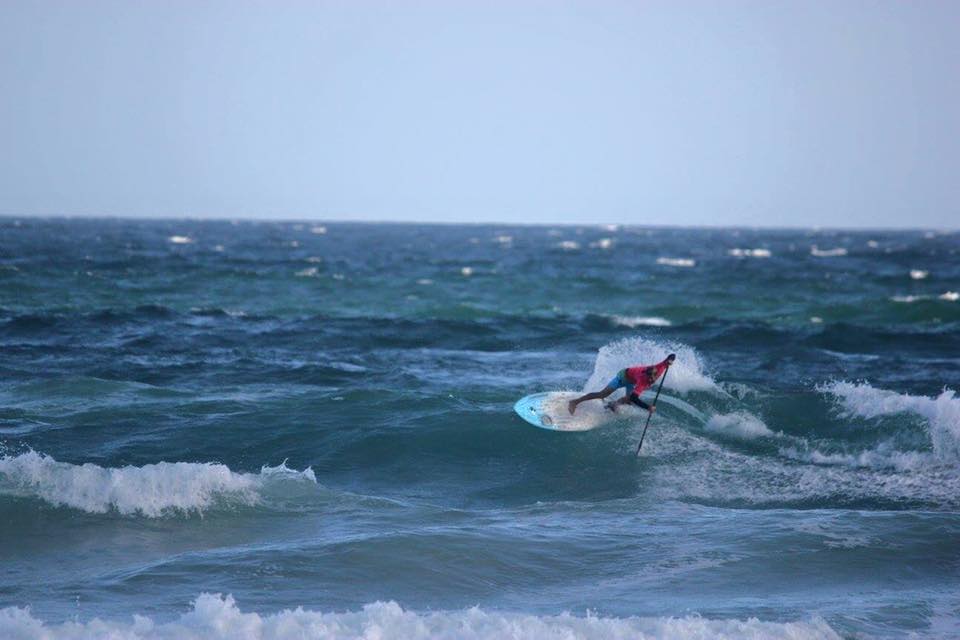 Tom King killed it in the SUP Wave event

Eventually the Mens Open Surfing was won by Tom King who held off strong challenges from Dylan Frick , Nick Walker and Kimon Dos Santos. The Ladies Open Surfing saw Tarryn King reclaim the top spot ahead of the twins, Penny Stemmet and Tammy Robarts, ahead of Chelsea Van Rooyen. 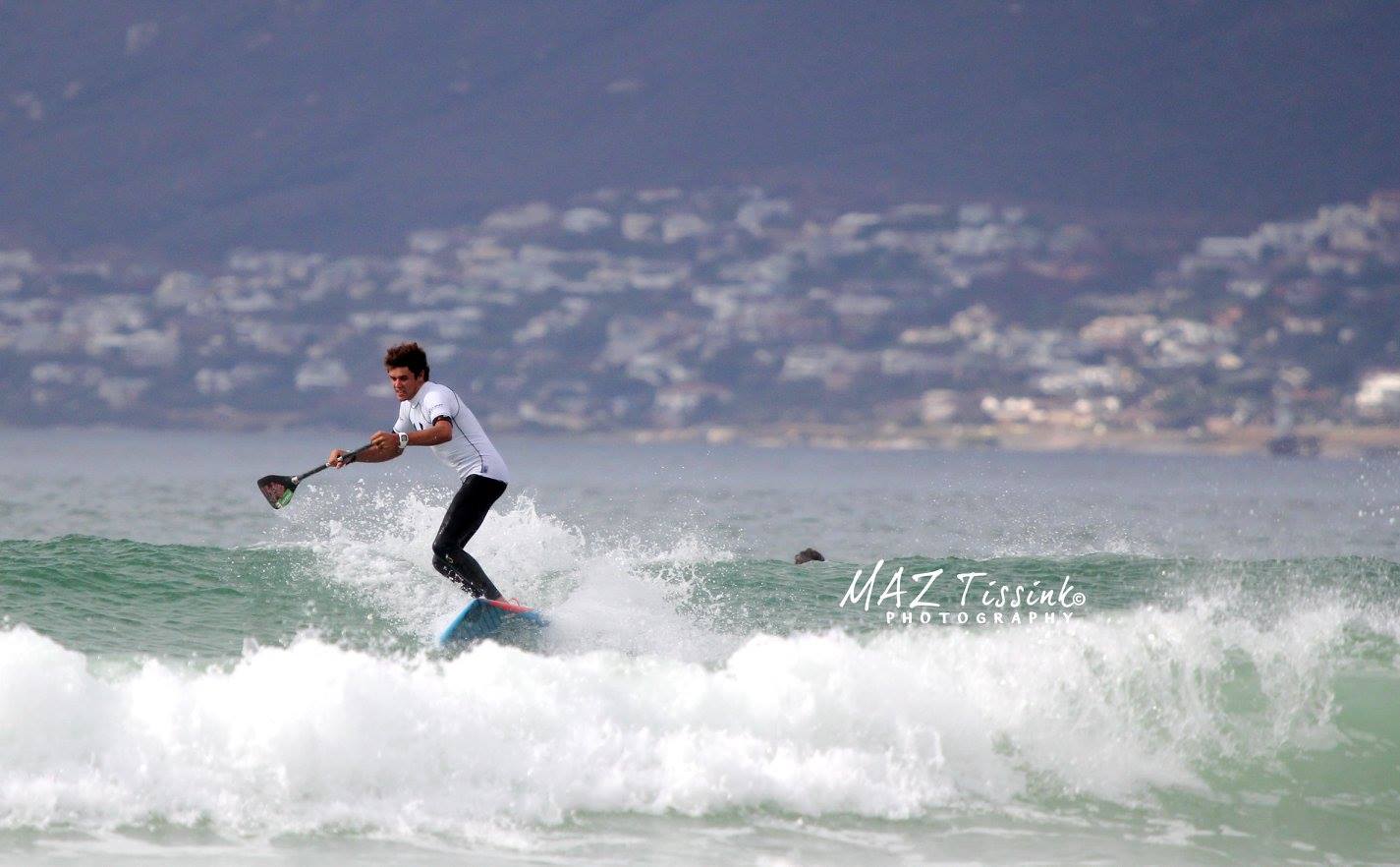 Dylan Frick charged hard but had to settle for 2nd

In the Juniors Boys , Nick Walker maintained his dominance, as did Khara Thompson in the Junior Girls, and Grantlee Read in the Legends. The Diva’s division was won by Kim Du Venage, and Groms by Cameron Tripney. The popular Social divisions were won by Mike Teron in the Mens and Jess Gould in the Womens.
Fresh onshore conditions greeted competitors in the racing divisions on Sunday morning at Fish Hoek beach. Technical races in and out through the 2 foot onshore surf tested competitors wave knowledge as well as paddling skills, and most divisions saw nailbiting races go down to the wire. 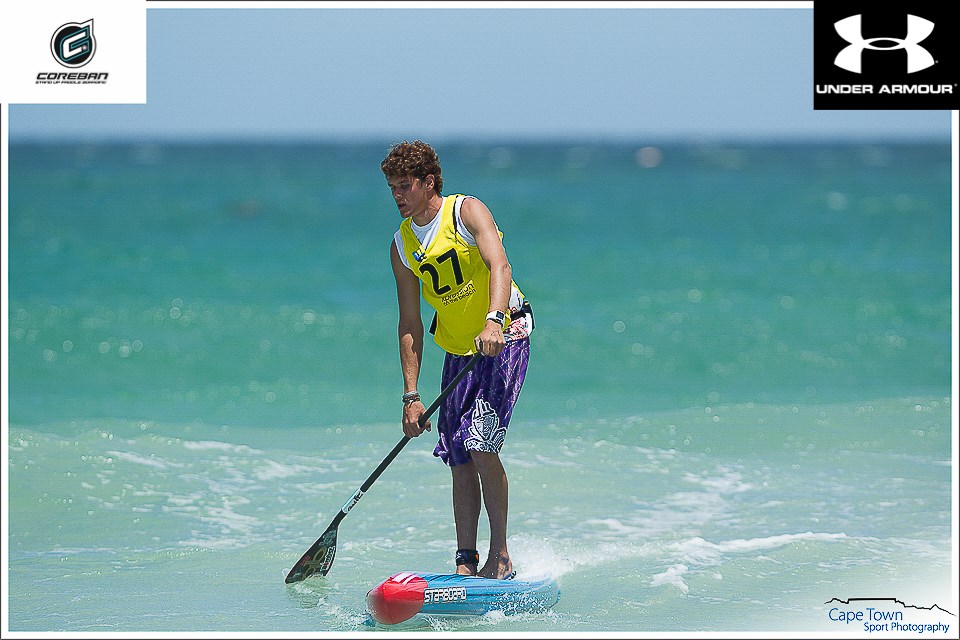 In the end Dylan Frick showed his class to take out the Mens Open race, while Tarryn King did likewise in the Womens Open. Grantley Reed took his second win in the Legends, while Kimon Dos Santos won the Junior Boys.
Competitors than moved to the start of the long distance race , run as a downwinder from Millers Point to Fish Hoek. While many were praying for the wind to strengthen prior to the race, the race proceeded in a South Easter blowing around 15 knots, making for a challenging run for novices to the course.

Again Dylan Frick showed his class despite not being familiar with the conditions and held off a strong challenge from Tom King to win the race. Tarryn King made a clean sweep of wins in the Ladies Open division ahead of Jackie De Billot from Durban. The Legends division saw some very competitive racing across the division, with Peter Petersen holding off local Gary Van Rooyen ahead of a tight cluster of racers. In the Junior Boys, Kimon Dos Santos celebrated his last junior event with a convincing win ahead of Matt Maxwell. Monika Wolgemuth took out the Divas and made them proud with a third in the Open division as well. Mike Teron and Emmie Ruddock were the winners of their respective Open Divisions.

The overall results for the event are calculated by adding the scores for the surf event to the two races to determine the most all rounded paddlers in each division. A prizgiving was hosted by the Fish Hoek Lifesaving Club in their comfortable clubhouse. 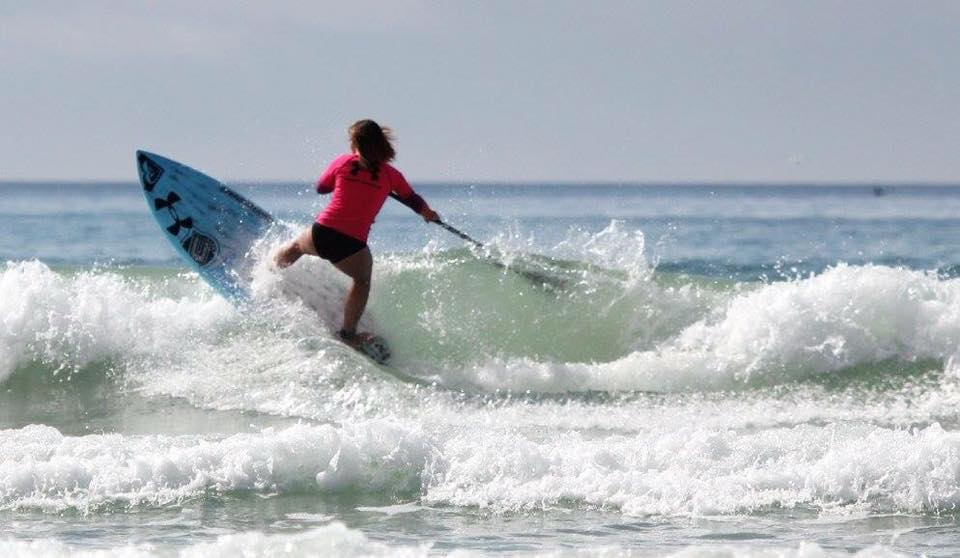 In the Mens Open division Dylan Frick narrowly edged out Tom King, with juniors Kimon Dos Santos and Matt Maxwell filling the rest of the podium to underline the bright future of Supping in SA. In the Ladies Open Tarryn King dominated with three wins ahead of Jackie De Billot and Tammy Robarts. Diva’s winner Monika Wolgemuth also had an impressive fourth in the Ladies Open.

In the Legends division the podium was filled by Grantley Read, Gary Van Rooyen, Pete Petersen and Dave Maxwell. In the Junior Boys Nick Walker ended on top ahead of Kimon Dos Santos, Matt Maxwell and Henco Scholtz. None of the Junior Girls entered the races, so their overall results were determined by the surfing event, and saw Khara Thompson ahead of Gabi Lupini, Cauitlin Brouckheart and Bowien Van Der Linden.

Podium positions in the Social Mens went to Mike Teron, Justin Linley, Steve Tripney and Grant Renecle , with Emmie Ruddock winning the Social Womens ahead of Tatum Prins, Jess Gould and Marije Elgersma.
The only Grom entrant, Cameron Tripney, also won the Special Spirit of Under Armour award for his efforts over the weekend.

Check out the Facebook album here for more pics from the event:

What incredible photos depicting what was an awesome event! Until next time…