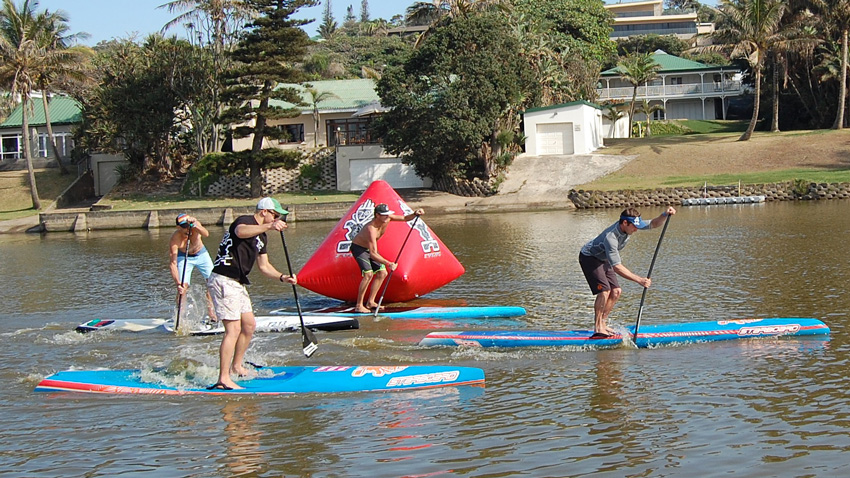 The 2015 Starboard Zinkwazi 10KM SUP Race took place on Sunday, 14th June at the Zinkwazi Lagoon, just north of Ballito in Kwa-Zulu Natal. A beautiful, sunny winter’s morning had 40 contestants from all around the country gather around the Starboard Gazebo to listen to the Race Briefing around 8:30 AM. 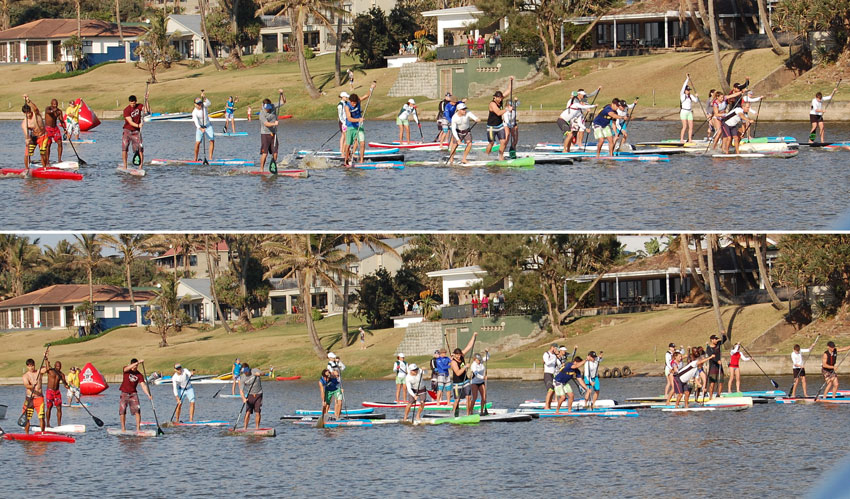 With South Africa’s strongest Paddlers attending this Race had to once again be one of the most grueling SUPSA sanctioned, flat water races on the South African national Stand Up Paddling Circuit. 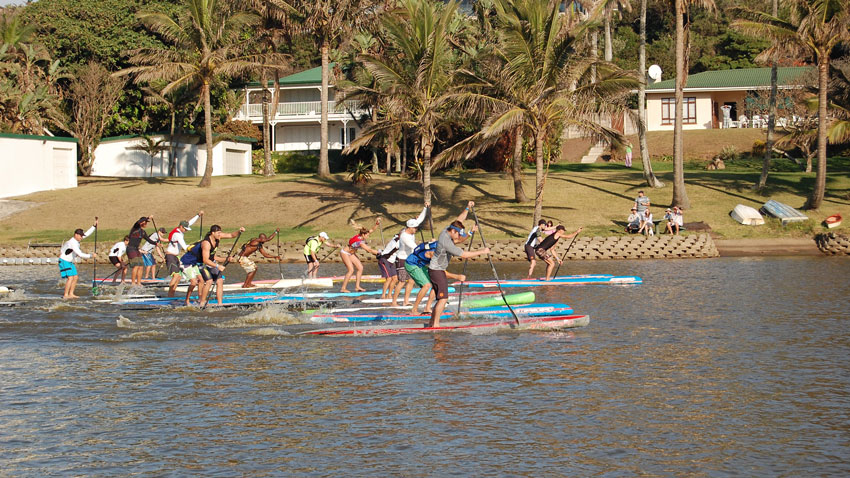 The airhorn signaled the start at 9:00am and it was International Starboard Team Rider, Dylan Frick who took the lead off the start line with Gunter Berger and Chris Couve up at the front fighting it out for his slip. Tarryn King from Cape Town, the 2014 Zinwkazi Race Winner, who had just returned from the SUP World Championships in Mexico, had a shaky start, but managed to reel in Shelley and Jackie, by the time that they got to the first turning buoy, proving that she was the Lady to beat. 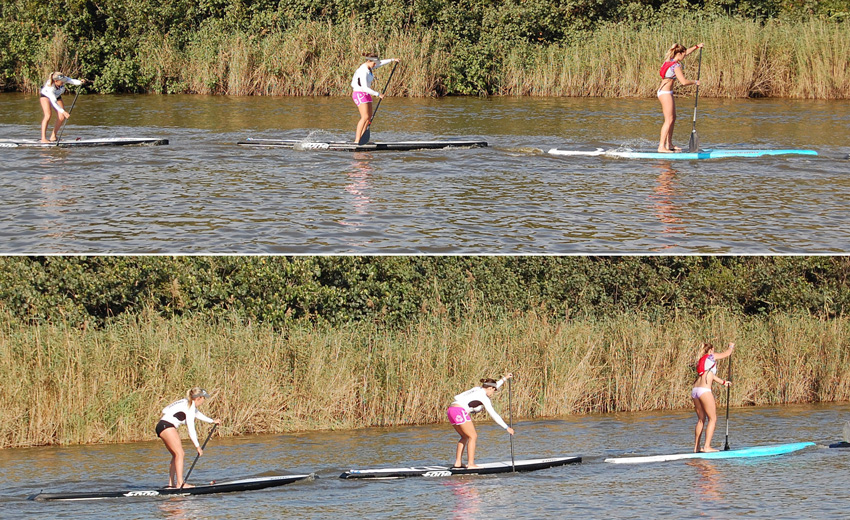 After a sharp and aggressive buoy turn, Dylan Frick managed to open up a gap from Chris Couve, Gunter Berger, Just Bing, Stephen Lawson and Brandon Read forming the following bunch. Tarryn King had also furthered her gap to Jackie de Billiot, who was unfortunately at a disadvantage, as she was suffering from flu. Shelly Bradfield in 3rd position had set a comfortable pace for herself and was on a mission to chase Jackie.

The next 2.2 km was a constant grind with everyone having settled into a steady race pace. Dylan Frick still in the lead came flying out of the next beach buoy turn near the mouth of the river with Chris and Gunter trying to close the gap that Dylan had opened on the first turn. Gunter now took charge of the draft train giving Chris some time to recover in his side wave. 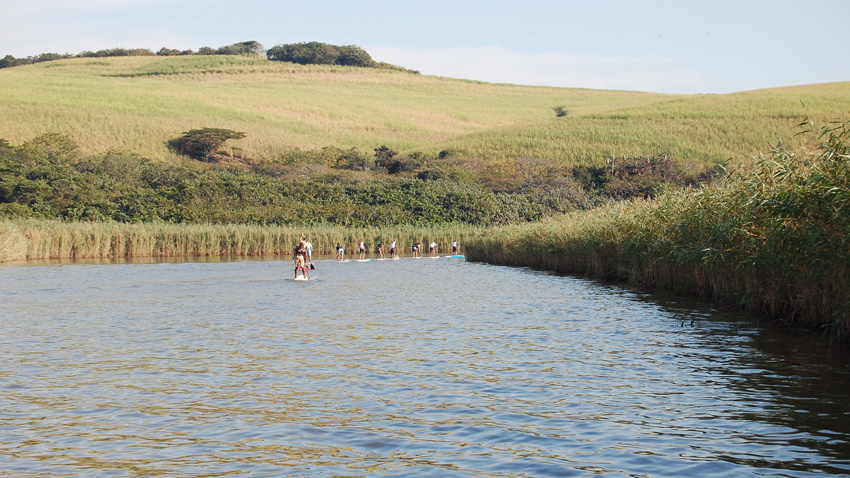 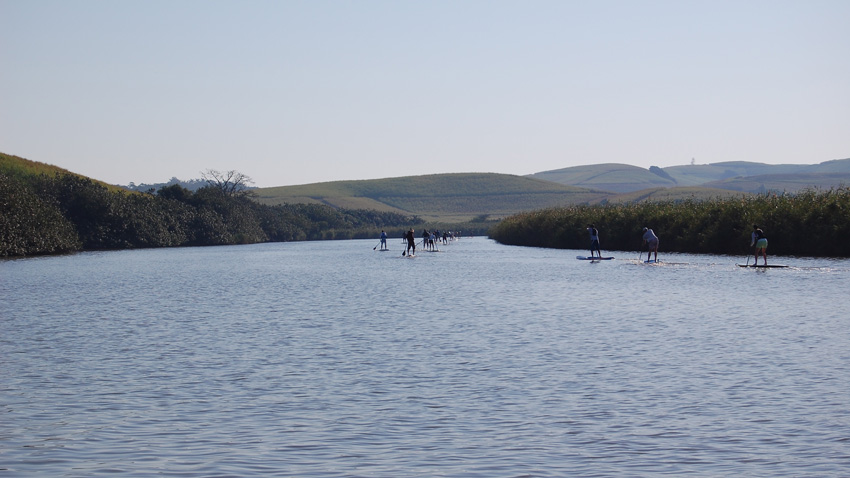 Further at the back of the field, saw Shayne, Thomas, Anton, Dean and Grant taking turns at the head of the second chasing pack.

The long grind back to the far buoy had everyone now feeling the heat of KZN’s warm and humid climate. Shortly before the top turning bouy Chris found an opportunity to leap off the front of the leading draft train with a sudden interval that caught the rest of guys unaware. Coming out of the buoy tunr the positioning was such that Dylan was in the lead followed by Chris both working on their own, with Gunter, Justin, Stephen and then Brandon together in the lead pack. 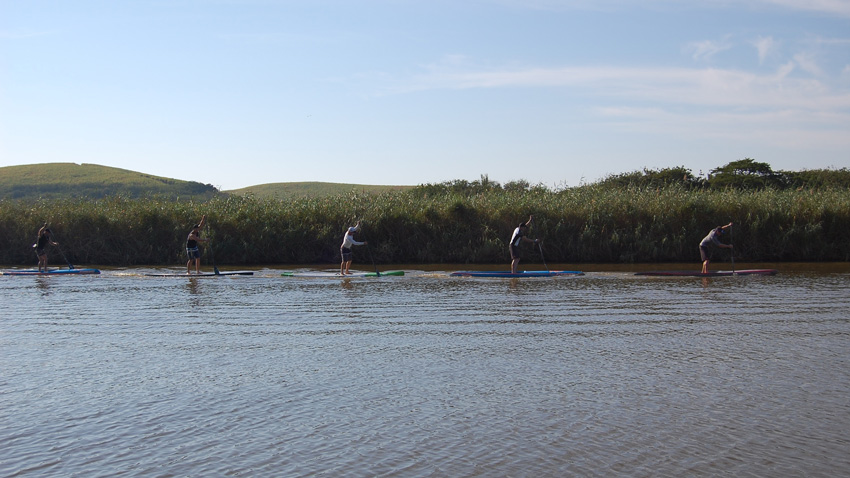 Dylan Frick was the first to beach finish with a time of 1:00:11 with Chris Couve in second place a minute behind Dyl.

The positioning for third was intense, with Justin managing to sneak ahead of pack in the last 1.5km of the race to take 3rd place in a time of 1:01:36, leaving Gunter to battle it out for 4th place against Stephen and Brandon.

Tarryn King was the first Lady to cross the finish line posting a time of 1:05:47 to retain her title, followed by Jackie de Billiot and then former title holder Shelley Bradfield.

All 40 paddlers had crossed the finish line within a one and half hours.

Before the prize giving, all competitors formed teams of 5 to participate in a fun, Team Relay Race. A last beating to the heart had Team Coreban win the Team Relay Race, Team SUPDurbs took 2nd place and Team Starboard in 3rd Place.

The Prize Giving had trophies, medals and cash prizes for the Top 3 males, the Top 3 Ladies, the Top Lengedn over 45, the Top Diva over 45 and the Top Juniour.

Everyone was a winner on the day, going home with a complimentary Event T-Shirt, a Free Drink & Boereowors Roll from the local Beach Bar as well as a SUPSA Ranking and some incredible memories from the day.

Thanks go to the following: