This weekend is going to be an amazing weekend ahead. Stand Up Paddling is a sport that is growing globally and is something fun for the whole family to enjoy. We have 2 amazing events to entertain and keep you fit and having fun on the water.

Saturday 2nd March SUP Cape Town will be hosting their annual event Paddle for the Paw. This a great event that the entire family can enjoy and your furry friends are welcome. To get more information on this event contact kathryn@leaps.co.za. Amazing Prizes and loads of fun to be had.

The second event is the Annual Signature Century City Sup Challenge powered by Swatch. This event is the first SUPSA accredited race of the season and the first opportunity for SUP Athletes to start get those rankings up.

The event incorporates a 10km Race, 3km Race and some great fun social races. It is a day for the family to enjoy and a great way to get a feel for the SUP community. For more information on this event or to enter online please go to www.SignatureSurf.com. 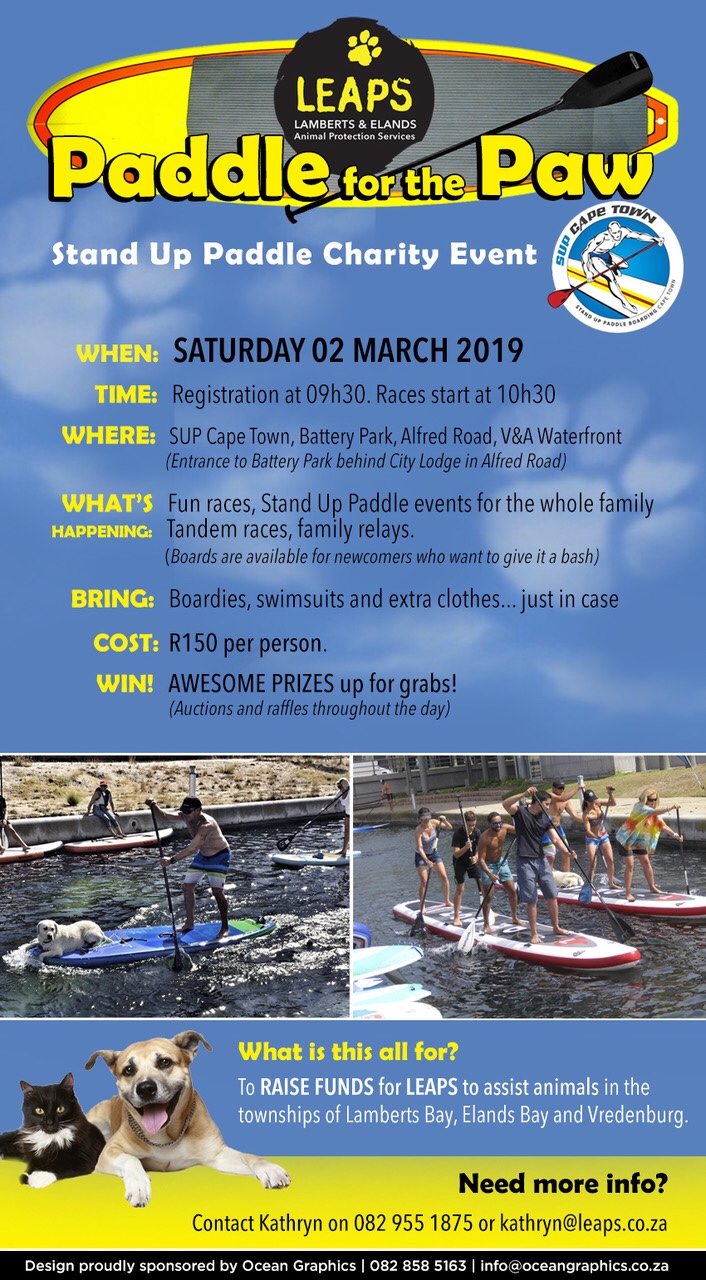 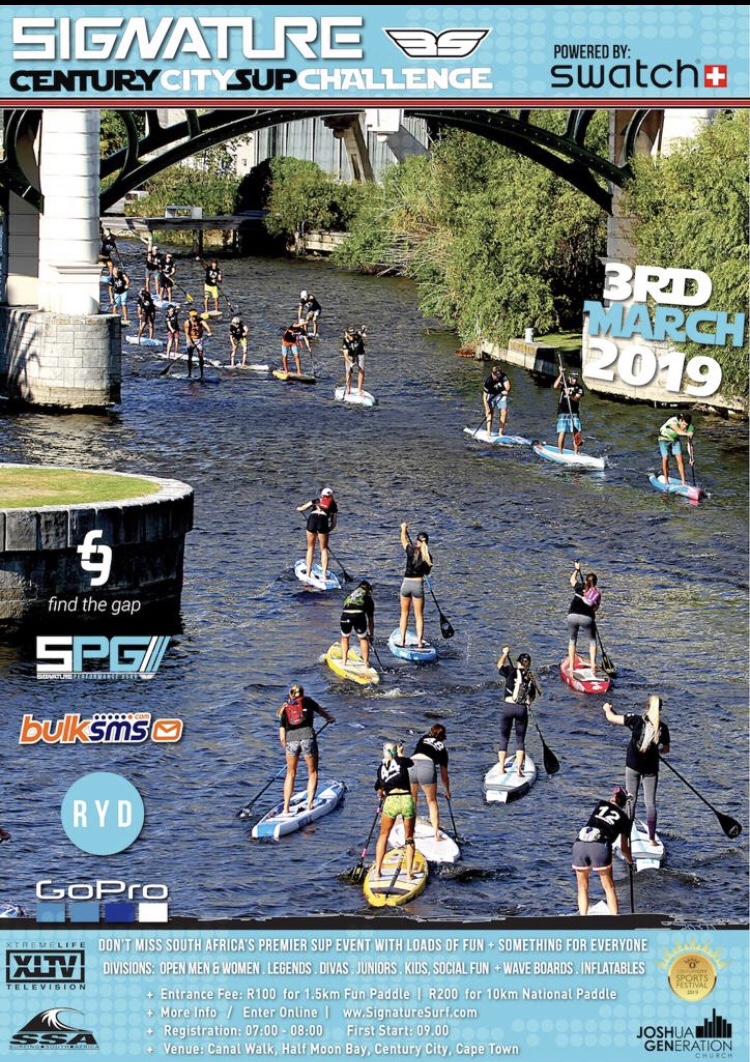 One Gold, One Bronze and One Copper! SA SUP Team Stoked 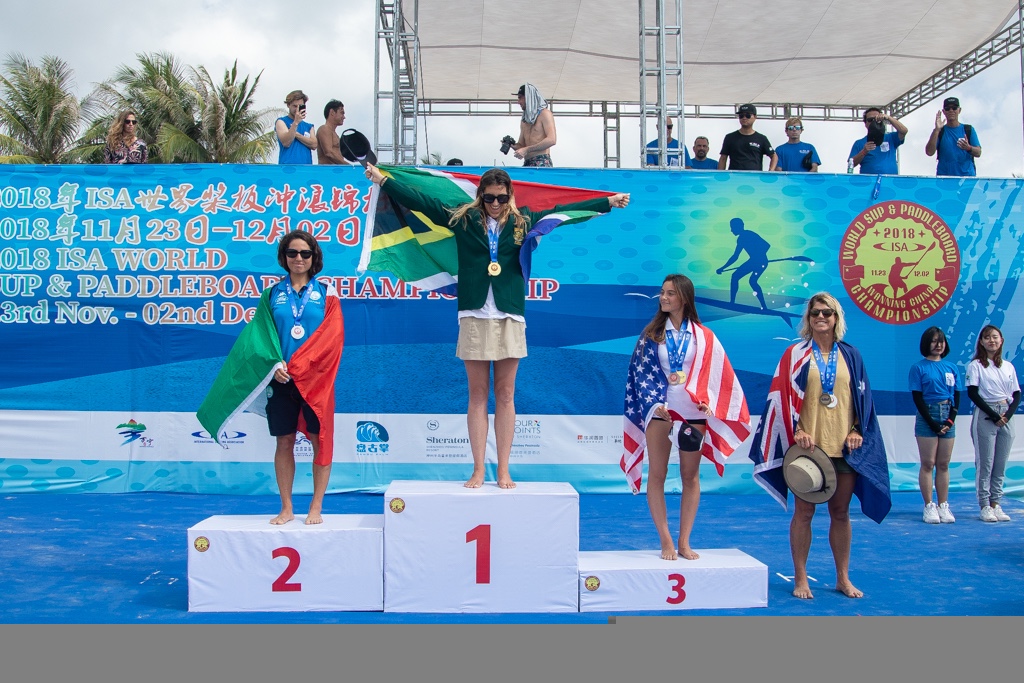 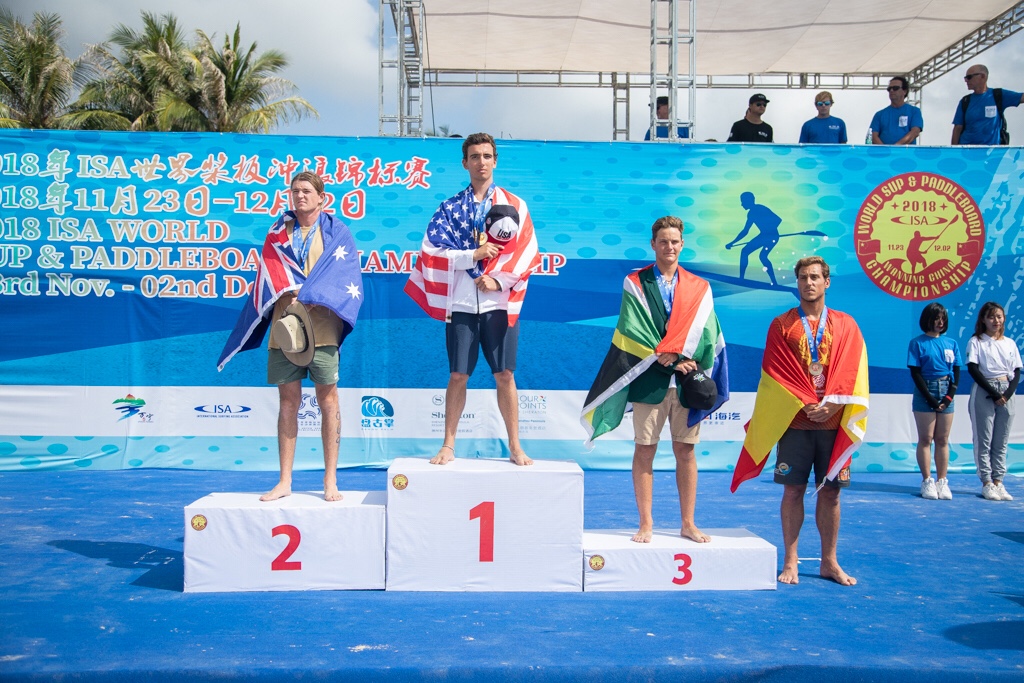 Today was another special day for the team and a testament to the commitment and training this team of athletes, coaches and management have put in.

Once again every member of the team put in their time and support to get behind the members participating and gave their all to deliver the best possible result.

Taking into consideration that each team member had to run fundraising campaigns to get to the worlds championships it really was an achievement to be here in the first place. Without the support of the SUP community, family, friends and the general public we would never have been able to do it. We really are truly grateful for the incredible support from everyone back home.

We unfortunately did not have a full team this year as we were short 1 Prone Paddle Board Women and 1 Long Distance Women due to funding challenges which all counts when it comes to Team points. That said South Africa still managed to move up 2 positions in the World rankings finishing 9th.

Every single Team member achieved amazing results and we are super proud to take home 3 medals for the country this year. Jadon Wessels got South Africa’s first medal when he got the copper medal in Prone Paddle-board Technical Racing, followed by Tarryn King getting the Gold Medal in the Women’s Sprint Racing and concluded by Jadon Wessels once again excelling and receiving a bronze medal in Prone Paddle-Board long distance.

Athlete Holly Henderson from Great Britain showed true sportsmanship by kindly lending Jadon her Prone board (Ruby) so that he could still compete when his board was held up in Hong Kong. This for any athlete can be their worst nightmare and thank goodness for athlete Holly and her Team Manager Dave.

Morning and evening bus trips to and from the venues were always filled with a combination of cheering laughter and a great vibe that we shared with our fellow athletes from Australia.

The ISA World Stand Up and Paddle-Board Championships has certainly been an experience to remember. I would also like to say that without our legend hostess @LeMeridian Shimei Beach Sally Su we would have been at a complete loss.

I know that each of us look forward to heading home in the morning and seeing all our family and friends. I shall stop off in Hong Kong for a small detour to see mates on route home but the rest of the team 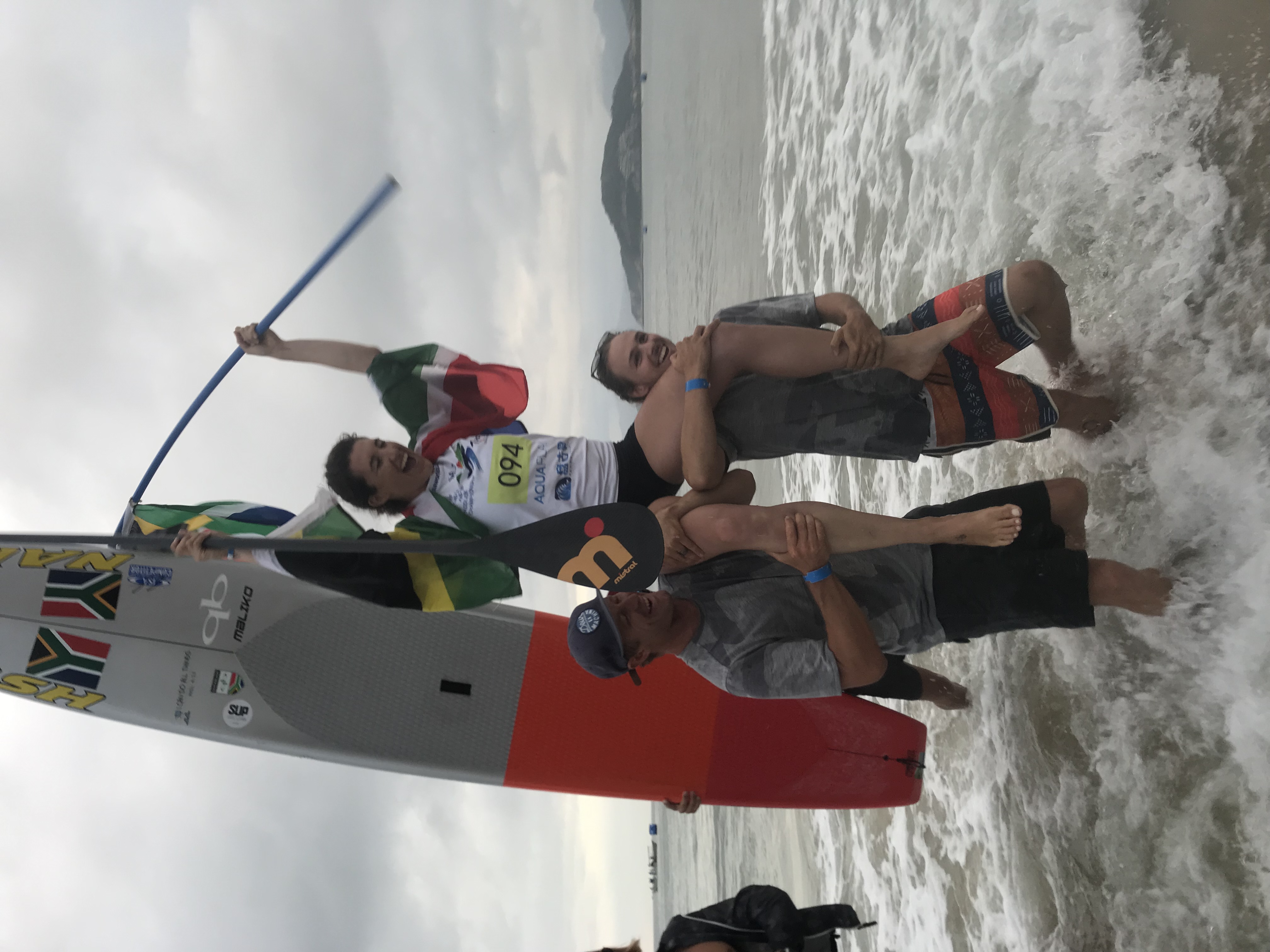 This morning the ISA World Standup and Paddle Board Championships moved to Shenzou Penisula for the Mens and Women’s SUP sprint races.

The women’s heats then began with Tarryn King winning her heat convincingly and moving into the semi finals. Tarryn then once again won her semi final heat to proceed to the Finals.

King built a decisive lead and crossed the finish line in first place to the cheers of her team on the beach.

“To win Gold in the Sprints is a dream come true.

“It’s been quite a journey from giving birth to being World Champion. I stayed fit during my pregnancy and once I gave birth, I bounced back quite quickly. I really focused on coming to compete in the ISA and it all paid off.”

Silver, Bronze and Copper positions were too close to call with the naked eye, but upon further review Italy’s Stenta prevailed with the Silver, USA’s Howson with the Bronze, and Australia’s Black with Copper.

With two days remaining in the event, the SUP and Paddleboard Distance Races and Team Relay will round out the event, determining the 2018 Team World Champion. Wanning, China, November 25, 2018 – After three days of SUP Surfing action at the 2018 ISA World SUP and Paddleboard Championship, the stage has been set to crown the event’s first ISA SUP Surfing World Champions in Asia.

The world’s best men and women SUP surfers have arrived at the Main Event Finals in Wanning, China and will contest the Gold Medals on Monday.

Brazil’s Luiz Diniz and USA’s Sean Poynter are the past ISA World Champions that have reached the Men’s Main Event Final. They will be joined by Australia’s Harry Maskell and Brazil’s Caio Vaz, both looking for their first ISA Gold.

“I am really enjoying the competition here in Riyue Bay,” said Harry Maskell. “Everything is going smooth and it’s great that the swell has arrived too.

“I got the Silver last year, so it would mean everything to get the Gold here in China.”

“I am really excited to make it to the final day,” said Iballa Ruano Moreno. “It’s been a long three days, but we had great waves and I am super happy about the conditions. It’s one of the best events that I have ever taken part of.

“There is still a long way to go, but winning the Gold would be a dream come true.”

The top two placing athletes from the Main Event Finals will secure a medal position in the Grand Final, while the bottom two will head to the Repechage Final where they get a second chance to advance to the Grand Final.

The third day of competition kicked off in a rejuvenated swell in Wanning, China with long left-hand waves peeling into Riyue Bay.

The past ISA World Champions, USA’s Sean Poynter and Brazil’s Luiz Diniz, continued to be the standout performers, respectively earning high heat totals of 16.10 and 15.8.

South Africa’s Thomas King took the high heat total honors with a 16.36 to stay alive in the Repechage Rounds.

After falling into the Repechage Rounds the previous day, Australia’s defending SUP Surfing World Champion Shakira Westdorp bounced back with vengeance and earned the three highest heat totals of the day among the women with 14.33, 14.27 and 13.37 in her Repechage heats.

Westdorp will look to scratch back into the Grand Final the hard way via the Repechage Rounds.

After the SUP Surfing Champions are crowned, the competition will transition to SUP and Paddleboard Racing, with the Technical Races to kick off the action in Riyue Bay. The SUP Sprints, Distance Races and Team Relay will cap off the week at Shenzhou Peninsula.

“The world’s best SUP surfers have been putting on a great show in excellent conditions at Riyue Bay. Tomorrow the hard work, national pride, and determination that we have witnessed all week will culminate with two World Champions.

“We have past World Champions in the mix, as well as new surfers who are looking to make a name for themselves on a global stage.

“The World Champions will write history as the first to be crowned in Asia, after the ISA has crowed champions on four continents throughout the past seven editions of the event. This will truly be a historic moment for the ISA’s development and governance of SUP.”

Matthew Maxwell has proceeded through to the Semi Final of the Men’s Main round this morning. Matt surfed a great tactical heat. 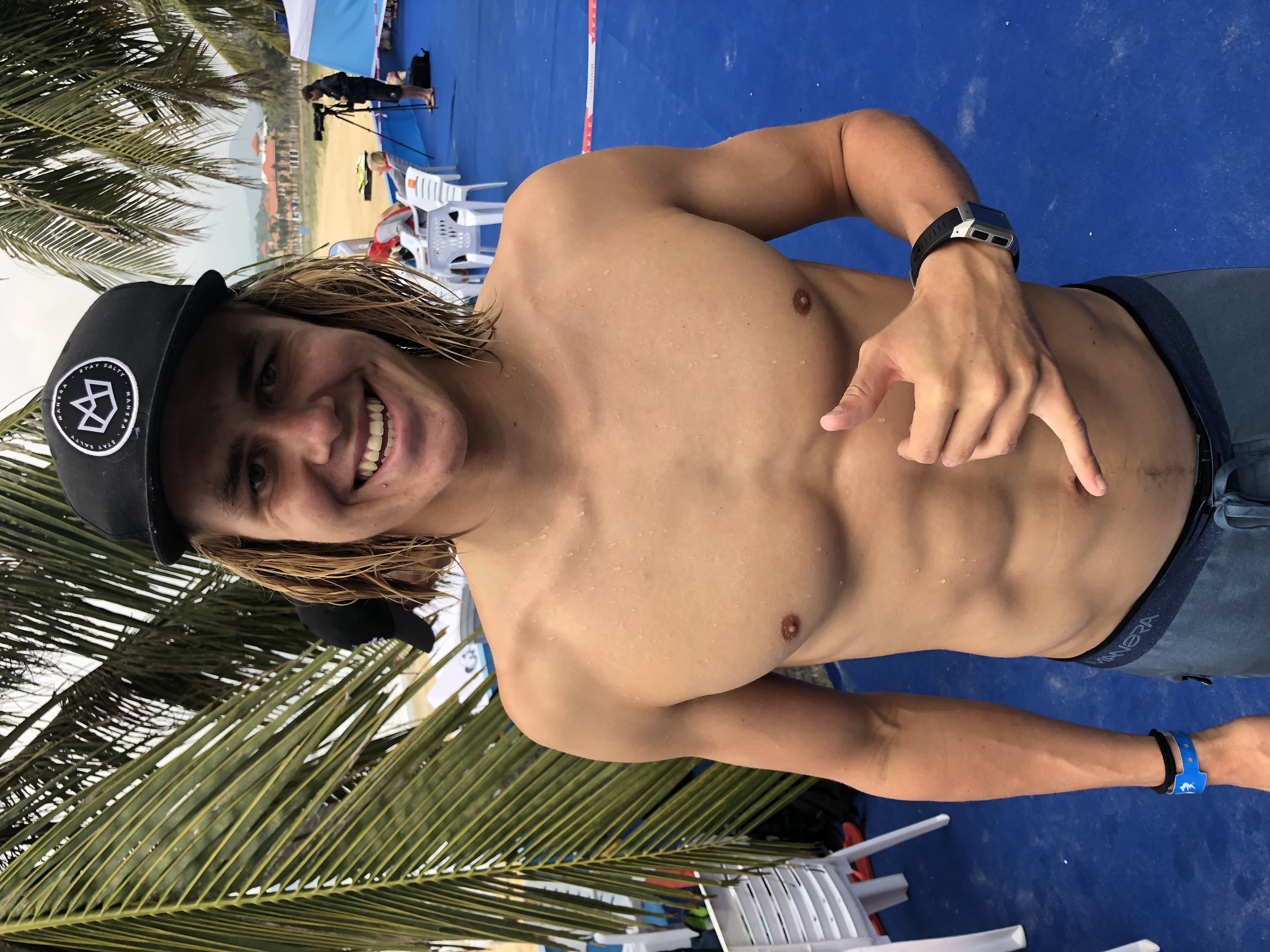 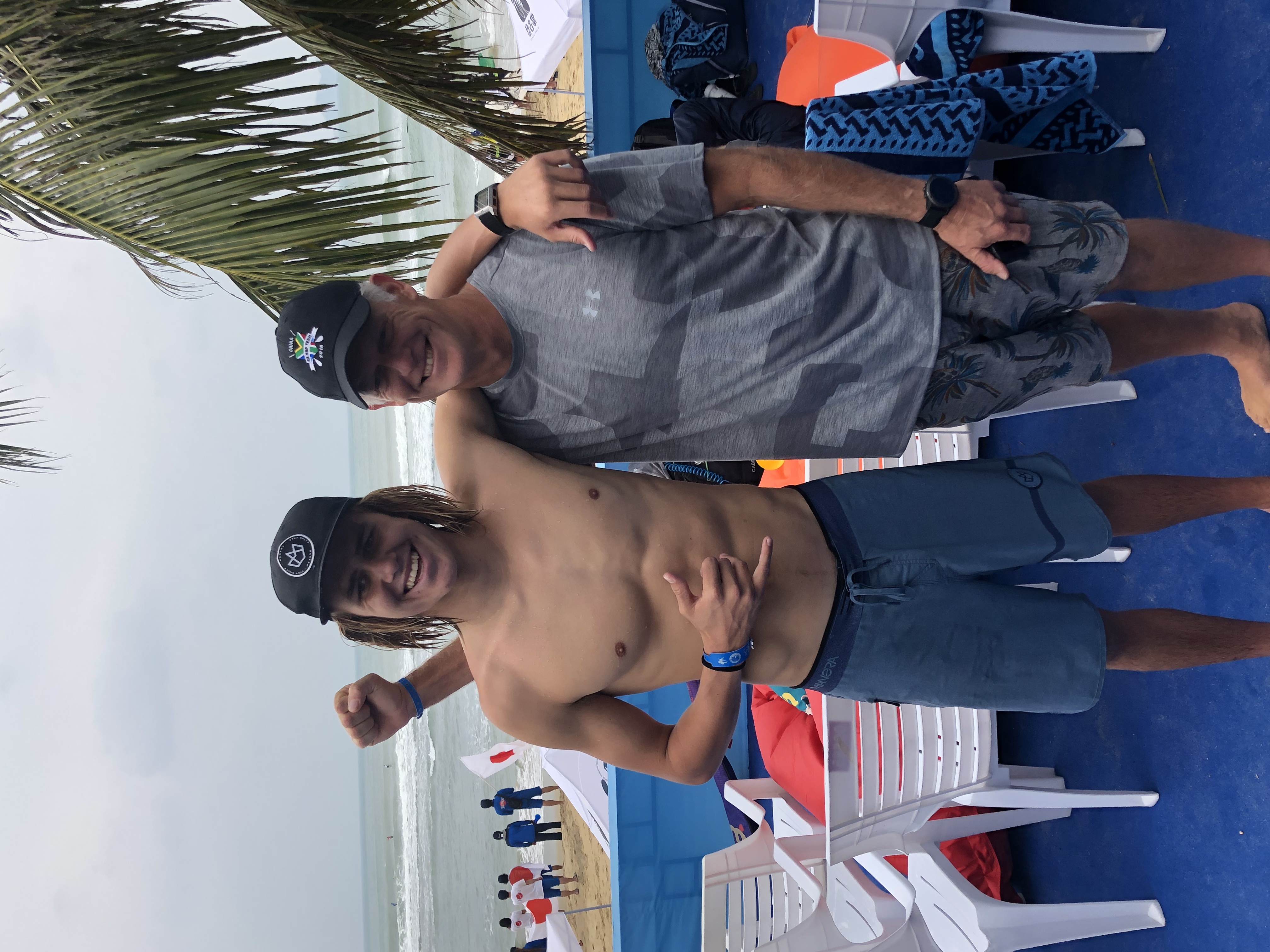 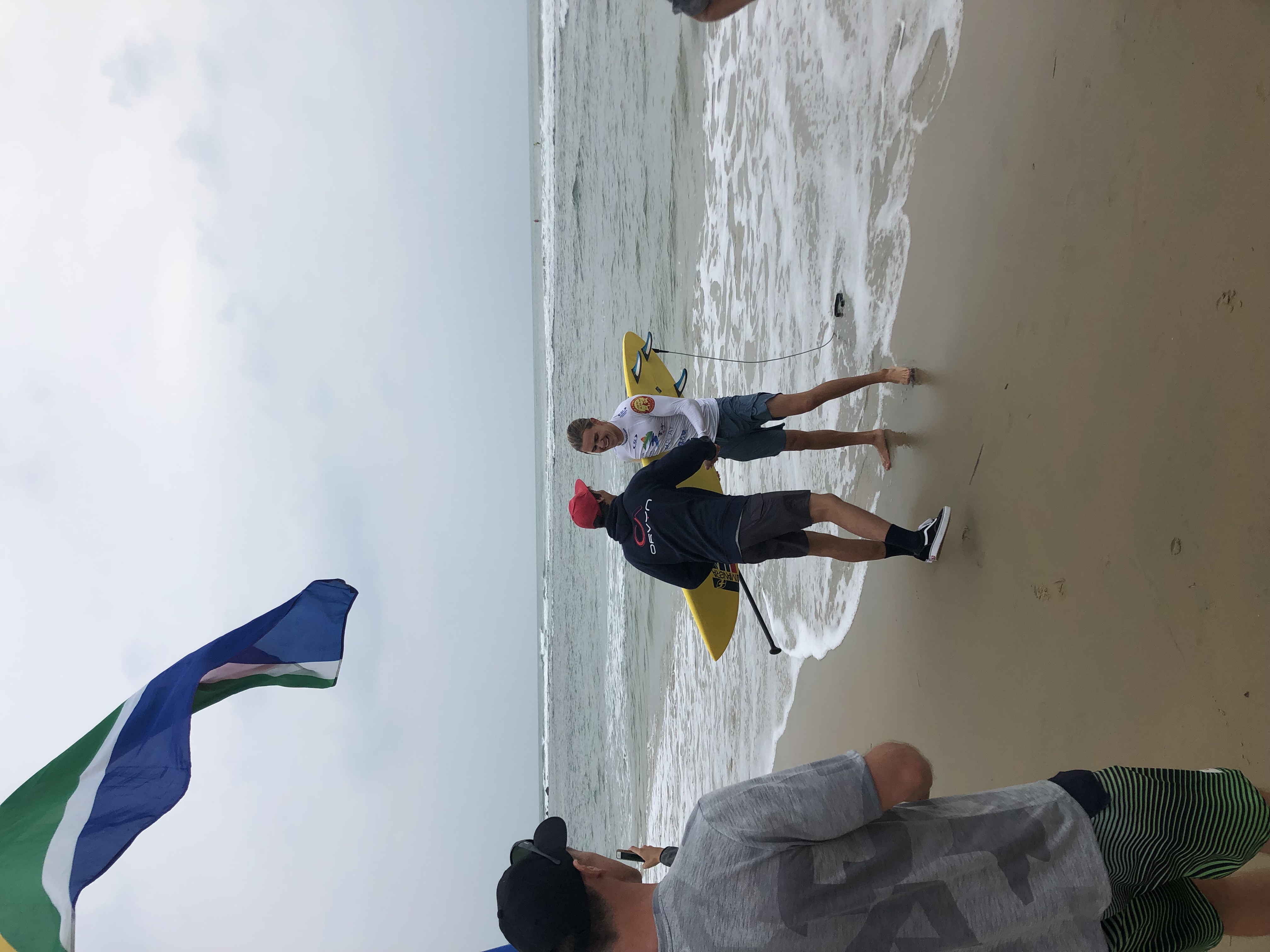